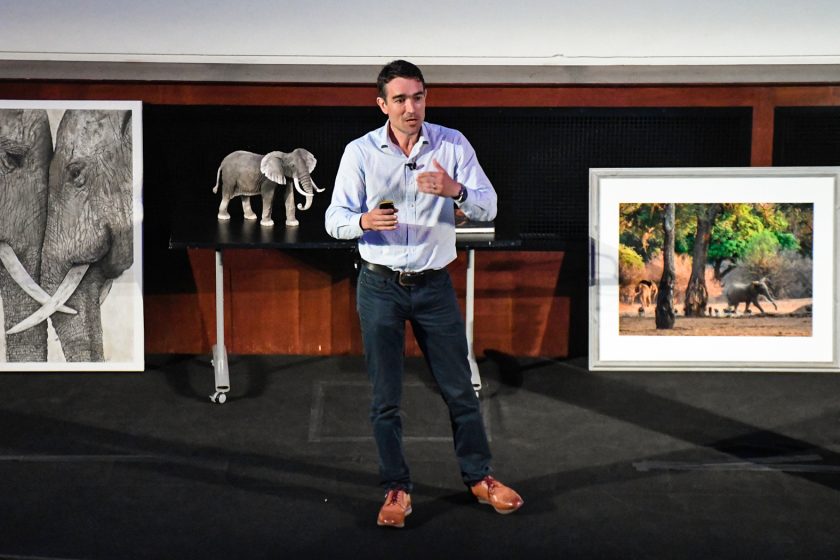 A short while ago I was asked to take some photographs at an event organised by How Many Elephants at the RGS to raise awareness of the plight of Africa’s elephants and raise funds for anti-poaching efforts.
The speakers were Holly Budge from How Many Elephants, Beks Ndlovu from African Bush Camps and Dr Niall McCann, a Conservation Biologist and a Director of National Park Rescue.

It was an excellent, well attended, evening with nibbles, drinks, good African music and engaging presentations. Altogether we raised in excess of £20,000 which would go towards anti-poaching.

It was enough though, to make me want to know more and also to make me believe that more people need to be made aware of NPR, and the job they are doing.
So I contacted Niall and asked if he could spare some time for an interview. He kindly agreed and so I made my way down to Cardiff for a chat.

That was the easy bit. The hard bit was transcribing our discussion from tape to paper. For a non-typist like me it was excruciating and took so long that I am sure Niall began to wonder if I’d fallen off the face of the earth.
Two long ferry crossings eventually provided the time I needed to finally complete the task.

I hope our discussions will give you something of an insight into National Park Rescue and what they are trying to do.

TMD – You’re a Biologist. I did Biology at school. How different is what you’re doing to what I would have done? What does a Biologist do, in practical terms?

NM – I’d be a rubbish school Biologist now because I know nothing about cells and I’m not very good at DNA or any of those things. What I do practically now is not really academic Biology. I work on the front line of conservation.
For years I thought that my career was going to be an academic career, where you’re working up towards being a crusty old professor and you’re going out and doing field work and analysing data and publishing those papers, but after doing my PhD, or during my PhD, I started to feel that for me there was an element of futility in simply recording when another species slips towards extinction.

I was working on Baird’s Tapir for my PHD, in Honduras, and where I was studying them, across the northern part of Honduras, they were just being picked off and the so numbers were dropping off a cliff.

TMD – Picked off why?

NM – They are 300 kilograms of bacon, it is an enormous animal. In Malaysia they are 400 kilos, it’s massive, and the Amazonian tapir is 200 kilos; the smallest tapir up in the Andees is 150 kilos.

TMD – Incredible, I never realised they were so big. Do they burrow?

NM – No, completely terrestrial, not subterranean. They leave very distinctive large footprints because they are so heavy.
At that point I was thinking “Great, I’m studying an endangered species, publishing, this is all great; then I felt that there was an element of futility in simply studying an endangered species. I was calling myself a ‘conservation biologist’ but was that right? I couldn’t call myself a ‘conservationist’ because I wasn’t conserving anything. Conservation biology is the study of endangered species and that was something I was interested in but not interested enough to spend my entire life doing it.

TMD – I would imagine that in the long run, unless you become more active, proactive, it would ultimately be quite demoralising just basically watching species diminish and go extinct.

NM – Completely, and I think the life of most academics has been pretty demoralising. A lot of them are sufficiently wrapped up in the particular question they are trying to answer, but those that have that broader view will have witnessed whatever species they’ve been looking at sliding towards extinction over the course of their career and I didn’t want to be in that position. I felt the only way I could achieve that was to extricate myself from academia and actually go into front line conservation, taking the fight to the poachers and the traffickers and the illegal foresters.

So I completed my PhD and I left academia and I set up this organisation, National Park Rescue to try and stop extinction from happening in the first place.

TMD – I looked at your website and to be blunt, it’s a bit sparse on information about what you are and what you do.

NM – One of the main reasons is that we’ve got to be a bit sensitive about what we put online because we’re working in Zimbabwe which is quite a sensitive country which doesn’t really like to have external influence.
What National Park Rescue does is identify National Parks in the most need of help, those that cannot cope with the poaching crisis, and then tries to rescue them.
We’re on our second operation; the first one was in Liwonde National Park in Malawi, which was absolutely on its knees in the mid 2010s, having been poached to oblivion through complete institutional neglect, corruption, ambivalence; a really bad combination. We came in and did a 9 month operation which was basically a holding operation before African Parks came in and took over at the end of 2015.

During that 9 month we arrested 75 poachers and we removed 10,000 snares and gin traps.

TMD – So how exactly does it work? You do your research and identify the parks and then what, you approach the Malawi Parks Board and say “We think you need us to go and do this”? Or did you know that African Parks were coming and therefore you know you were preparing the ground for them?

NM – Malawi was a different situation because we knew there was a big organisation coming in so what we needed to do was make sure there was something there for them when they arrived. To make sure there were any elephants left; there were 8 rhinos, we needed make sure there were still 8 when African Parks started.
The Zimbabwean situation was slightly different because we had decided by that point that our model was going to be relatively similar to African Parks so we were looking for longer term interventions.
We had a key decision to make; do we go in and perform these rescue operations and then allow someone else to swoop in after us and take that on; in which case you’re always reliant on someone being willing come in after you and that’s not an easy thing; you can’t have African Parks just following you around the continent. It wouldn’t work, big organisations would be unlikely to follow us in so we realised that if we really want to be effective we can’t just be looking to do short term interventions – a rescue here, a rescue there – we need to take over as much as possible the responsibility for that park and bring it out of degradation ourselves.
In Zimbabwe, it was the head of African Parks, Peter Fearnhead, that suggested we look at Chizarira; he pointed us in that direction.

TMD – Based on the Liwonde experience?

NM – Yeah, he knew what we’d done in Liwonde and he knew that we had a really successful model and that we could make a big difference and we were looking for the next park that really needed help. He pointed us towards Chizarira, at the same time he was doing that, which was around the time of the CITES conference in Johannesburg, the Great Elephant Census was published and that identified 2 parks in the KAZA (Kavango-Zambezi Transfrontier Conservation Area) region that were on their knees. One was in South Western Zambia, Sioma Ngwezi and one was in Zimbabwe, called Chizarira. Only those 2 areas were losing elephants, everywhere else was either stable or increasing. Gonarezhou is up to 12,000 elephants, Hwange is very stable, Chobe is very stable.

Although NPR is his main focus, Niall keeps himself busy working on other projects too. When we met he was just returned from making a documentary for the USA series Biggest and Baddest about rescuing and relocating alligators and he also finds time to volunteer for the mountain rescue team in the Brecon Beacons. An all action Biologist!

Anyone who knows anything about Africa will be aware that there is a mind boggling number of NGOs and aid organisations rattling cans and collecting donations for a huge variety of causes; some of them very big and some of them very small; some of them worthy and others a waste of space.
National Park Rescue is one of the little guys, but they are at the sharp end, involved in front line conservation.

If you would like to support their work you will find options for donating on their website – https://www.nationalparkrescue.org/