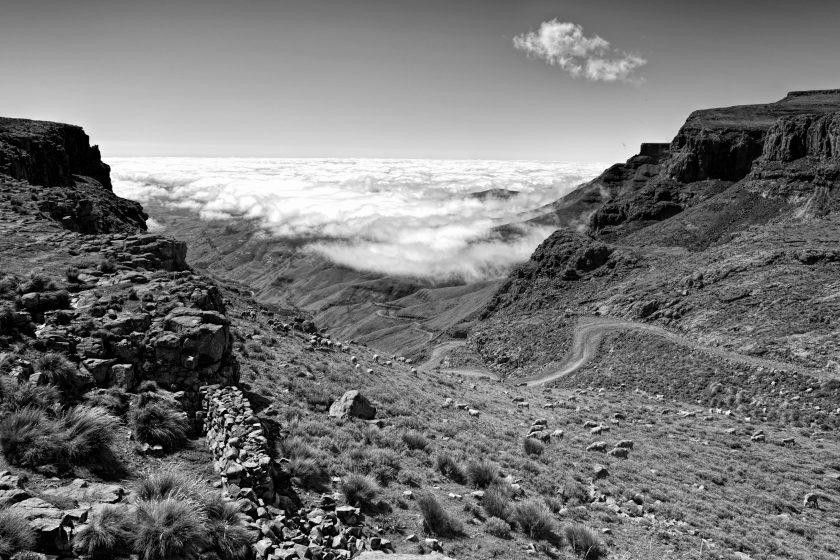 The Sani Pass is one of those iconic South African locations that sits on so many people’s wish list but so often remains a wish unfulfilled.
It provides the only road link between KwaZulu-Natal and Lesotho, and is the only road crossing the summit of the high Drakensberg.
Originally a mule track, it is still a tortuous, hair-raising road today.

It is also a birders paradise with some endemic species found nowhere outside the Drakensberg.

The route up Sani Pass starts at 1544m, and climbs 1332 vertical metres to an altitude of 2876m. (although a sign by the Lesotho border claims it is 3240m)
The steep gravel road has gradients up to 1:3, and can be difficult to drive in bad weather and may frequently be covered with snow and ice in winter.
By South African law only 4×4 vehicles are allowed on the road but you’ll encounter taxis and trucks from Lesotho that struggle through with just 2×4. Broken down or stuck vehicles are not an uncommon sight.
The road begins with a few kilometres of decent tarmac before becoming a rough gravel road. There had been heavy rain the previous day and as we ground our way up through thick mud, with a sheer drop on our right hand side, we soon realised why 4×4 was recommended.

The fact that the Sani Pass is a mecca for 4×4 drivers has not stopped the governments of South Africa and Lesotho from wanting to upgrade the road to one that is accessible to all vehicles.
The process of upgrading the Sani Pass dirt road is taking place in 2 phases; phase 1 extending for 14 km from the P318 (Sani Pass) turnoff and finishing at the old Good Hope Trading Post, and phase 2 extending from kilometre 14 to kilometre 33, the summit of Sani Pass.

Construction work for the first phase commenced in December 2006 and was completed in September 2012.
On 2 July 2013 the South African Department of Environmental Affairs and Tourism approved the execution of phase 2 of the project, with the ultimate objective to re-gravel the final 5 km of the pass. The department also authorized plans to upgrade the storm-water drainage system and retaining walls along the route to reduce sand and gravel erosion.
On 21 May 2014 the South African Environmental Affairs Minister, Edna Molewa, approved the execution of phase 2. Tarring was planned to start within five months following the announcement and would bring the total cost of the project to R887-million. In July 2015 it was stated that phase 2 shall be completed in 2019.
Ha Ha. By Feb 2020 only the first 3km on the South African side had been upgraded. Meanwhile, funded by aid money, the Chinese tarred 50km of road up to the border post on the Lesotho side in less than 3 years.

Given the low number of vehicles actually using the pass and the fact that even with a tarred road there will be little ‘trade’ between South Africa and Lesotho on this route; the bulk of trade between the 2 countries is likely to continue to be on the road that links Lesotho with the Free State. Using the route through the Lesotho Highlands and what will still be a tortuous twisting road through the Sani Pass is unlikely to be attractive. Given this, the cost seems high when set against the potential benefits.

Currently the Sani Pass is a mecca for 4×4 enthusiasts and is the focus of a tourism industry in the nearby towns of Underberg and Himeville. This industry will cease to exist once it is possible for self drivers to traverse the pass in their own sedan or a standard hire car.
The environmental impact is likely to be significant though – whatever the impact assessment concluded.

There are several species of bird endemic to the pass which are not found elsewhere. With traffic crawling up or down a rough dirt road these species are not disturbed very much and stopping to view them is easy.

Once the road is tarred and open to all vehicles the level – and speed – of traffic will increase and species that can currently be seen beside the road will move further away.
I also think that the increase in traffic and speed of travel will lead to a significant increase in the number of accidents and fatalities on the route. A combination of driving too fast, poorly maintained vehicles and drivers being distracted by the stunning scenery.

We checked out of South Africa and headed on up the pass. The South African border post is not actually on the border, but quite a long way below the summit of the pass.

As hoped, we soon drove through the clouds and emerged to see blue skies. The views back down the pass were spectacular and the better light made everything look more cheerful.

The Highest Pub in Africa

As you approach the summit, and the border, you see the highest pub in Africa, Sani Mountain Lodge.
The lodge is mostly in South Africa but straddles the border and you need to enter Lesotho to get to it. Apparently it’s a popular spot to spend New Year’s Eve.

The views back down the pass from here were pretty spectacular.

Once across the border into Lesotho we found ourselves on a plateau where the only inhabitants seemed to be shepherd boys and herds of sheep and goats.

It looked amazing on the way back down too, as the clouds parted over the river.

As for the birding, we managed to spot 77 species on our trip. This is about 20 less than we would have expected on a fine day, but with so many of them being specific to this region and therefore first time sightings it was very satisfying.
There were also other interesting creatures too, like the so-called ice rats that scurry around by the border post and lodge, or the Maluti River Frog and various crag lizards.

See it before it is gone

If you want to see this magnificent phenomenon, see it soon. Even now, with road construction crews at work, the birds have been disturbed and are harder to see than before.