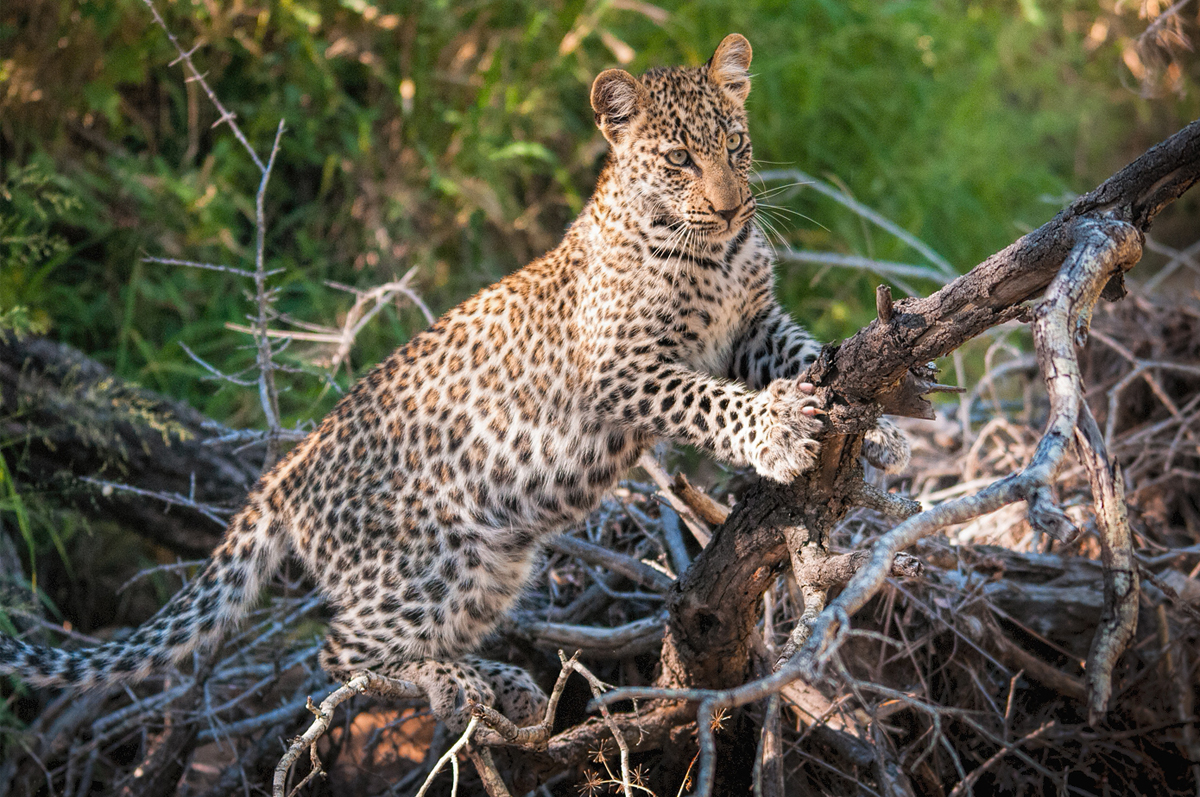 I know it is a terrible admission but, by and large, I find lions very boring. Sure they are the top predator in Africa, but they spend so much of their time just lying around sleeping that too often, after the initial thrill of sighting them, not much happens.

I get far more excited about other cats, especially the spotted ones: Leopards, Cheetahs or Servals; and in terms of photography, my absolute favourite is the leopard.

Don’t get me wrong; I adore cheetahs – is there anything more cute than cheetah cubs? – but their existence is so precarious that I feel a bit guilty staying with them too long for fear of interfering with their hunting. Because they hunt by day, and out in the open they can all too often attract a retinue of followers that give them no respite.
Serval cats are also beautiful, but so elusive that sightings are often fleeting.

Leopards are a secretive and elusive big cat; if they don’t want you to see them, then you probably won’t. They have the ability to melt away into the bush, disappearing from view at will. But, equally, in many areas where photo-tourism has flourished, they can be quite content to carry on with their activities unbothered by the attention.

No matter how many times I see leopards, by day or by night, it is always a thrill. To see a leopard with cubs is even more special and so a recent sighting in South Africa’s Timbavati reserve was particularly rewarding. 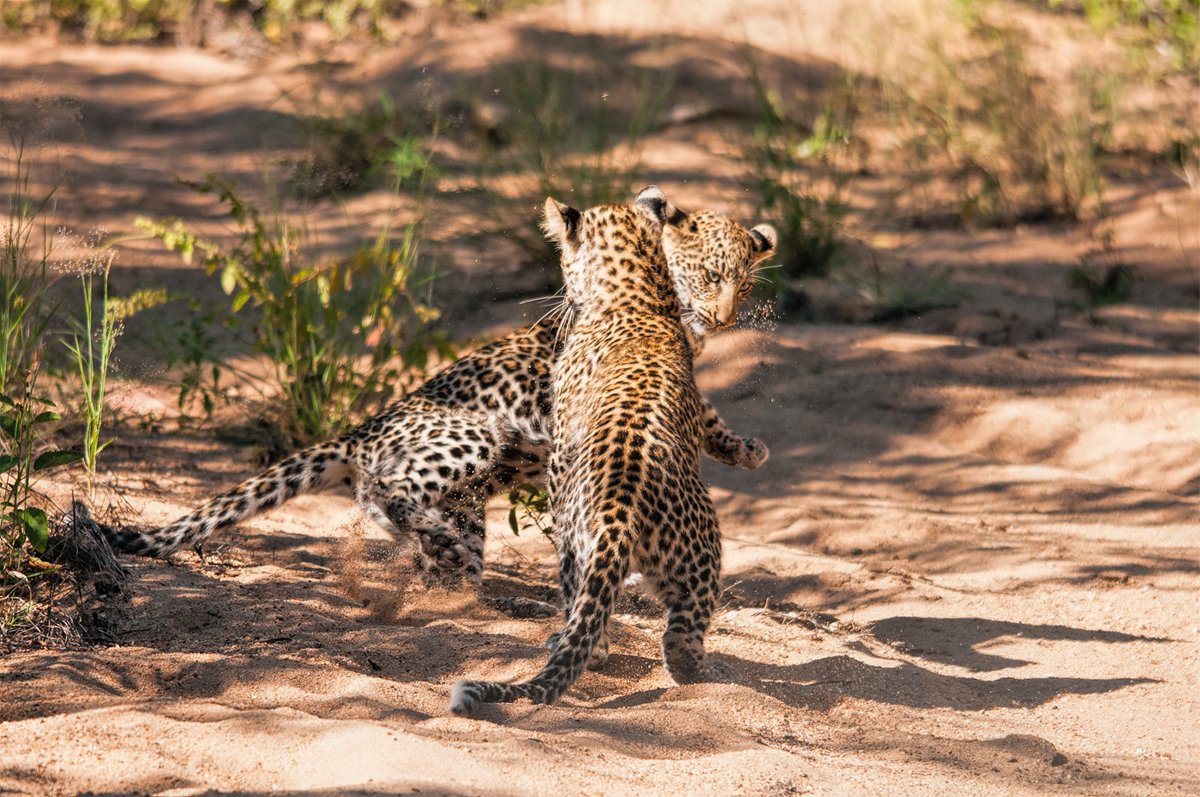 We actually spotted the cubs before we saw the mother. She had left them alone while she attended to some leopard business and, being young and full of energy, just sitting quietly until mum returned was not an option. They were having a lovely time wrestling with each other in a dry river bed and certainly were not at all worried about us.

When they eventually stopped, one of the cubs lay down in the shade but the other one was far more interested to take a closer look at the spectators and emerged from the bushes to climb onto a dead tree, only a few metres from our vehicle. He was so close that, ideally, I’d have liked to change to a shorter lens but I didn’t want to take my eyes off the action.

While our attention was focussed on the youngster, the mother had returned. Within moments the cub had scampered down from the dead tree and dashed through the bushes to leap on his mother. He clearly had plenty of energy left and wanted to spar some more.
We were entertained to some more high energy action as mother and son sparred. 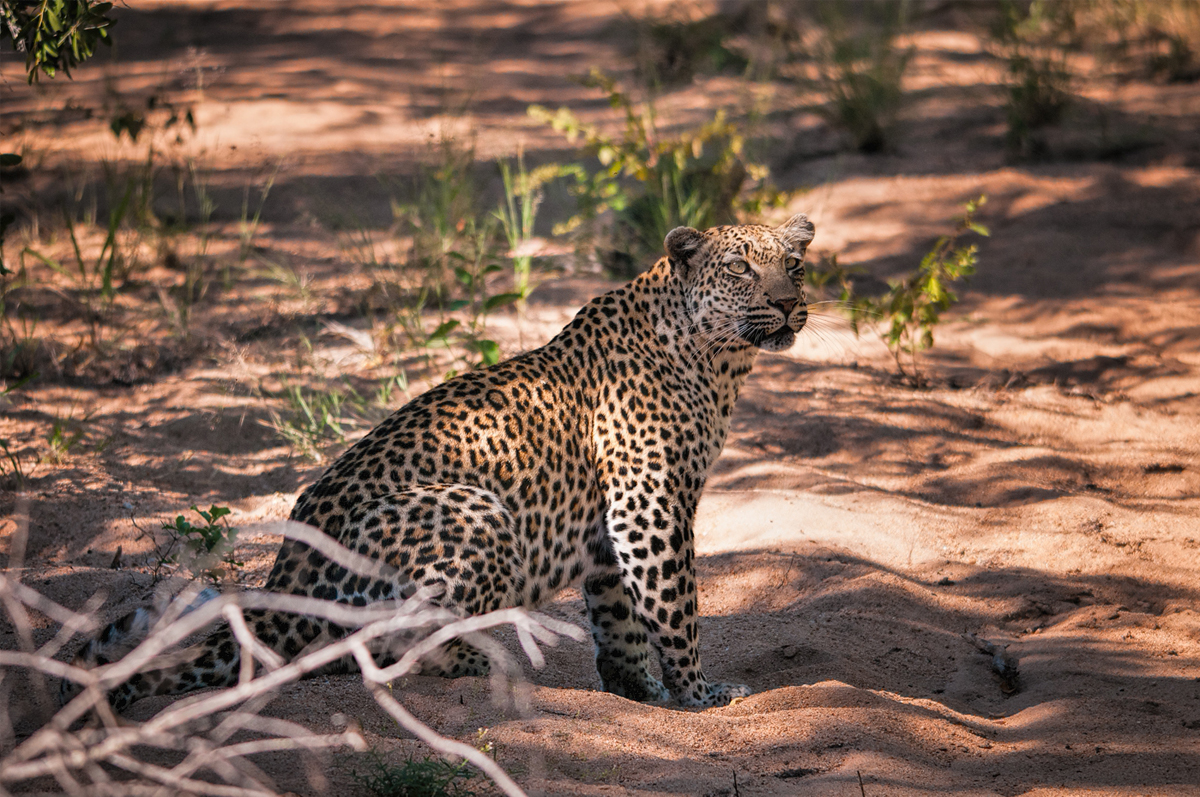 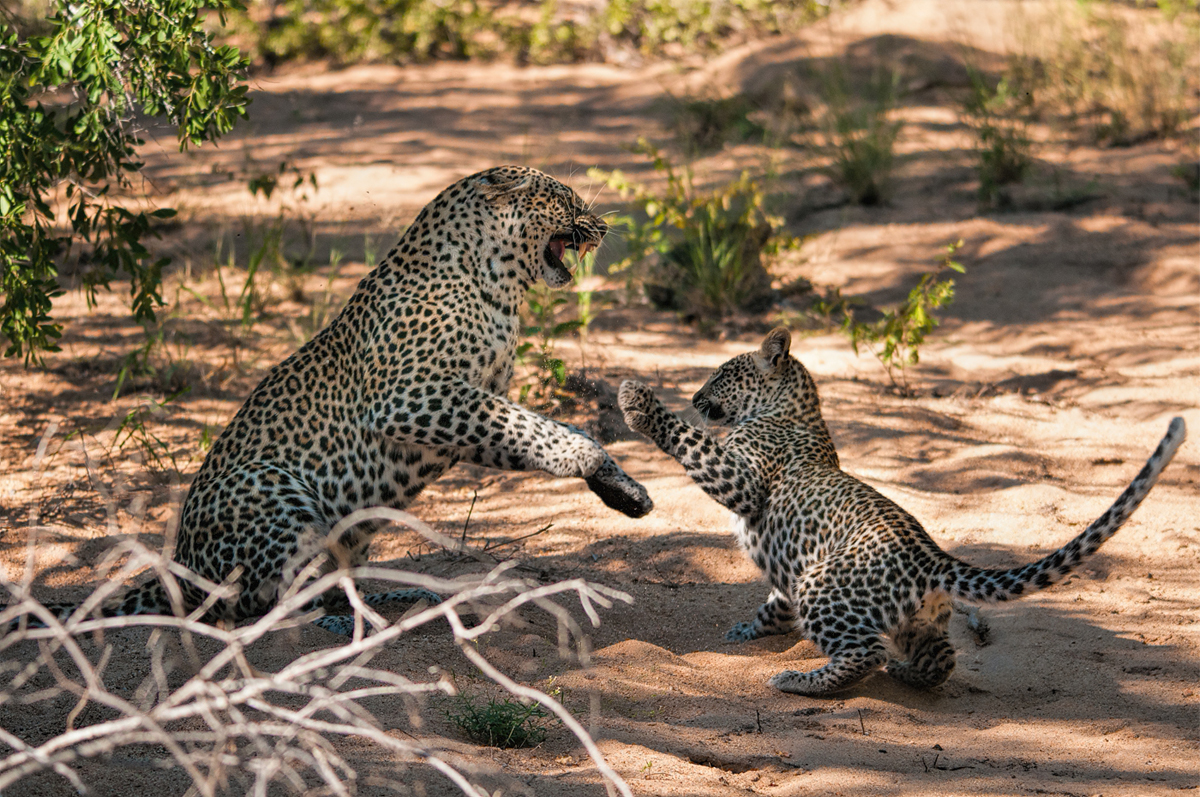 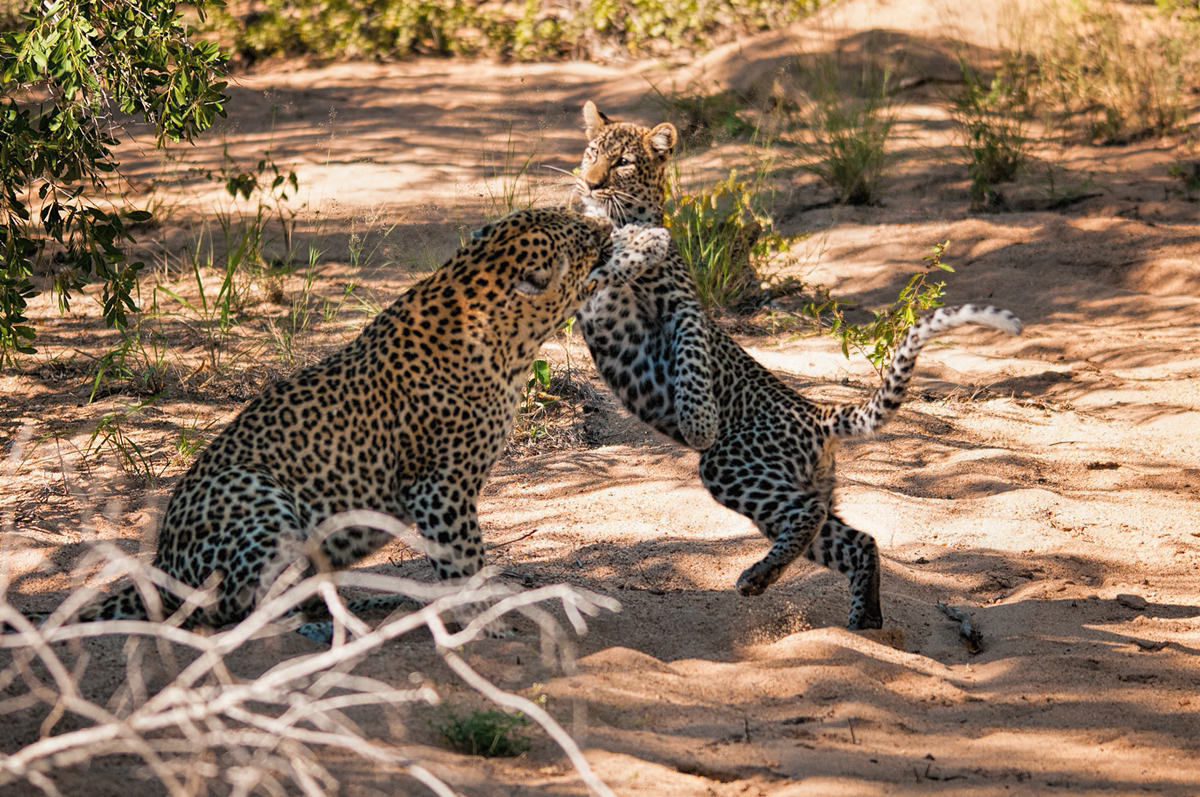 With her mother and brother otherwise occupied, it was now the turn of the smaller cub to come and check us out. She made her way through the bushes and emerged from the grass just in front of us. After sitting for a few moments to satisfy herself that we were no threat, she flopped down and just lay there, watching us. 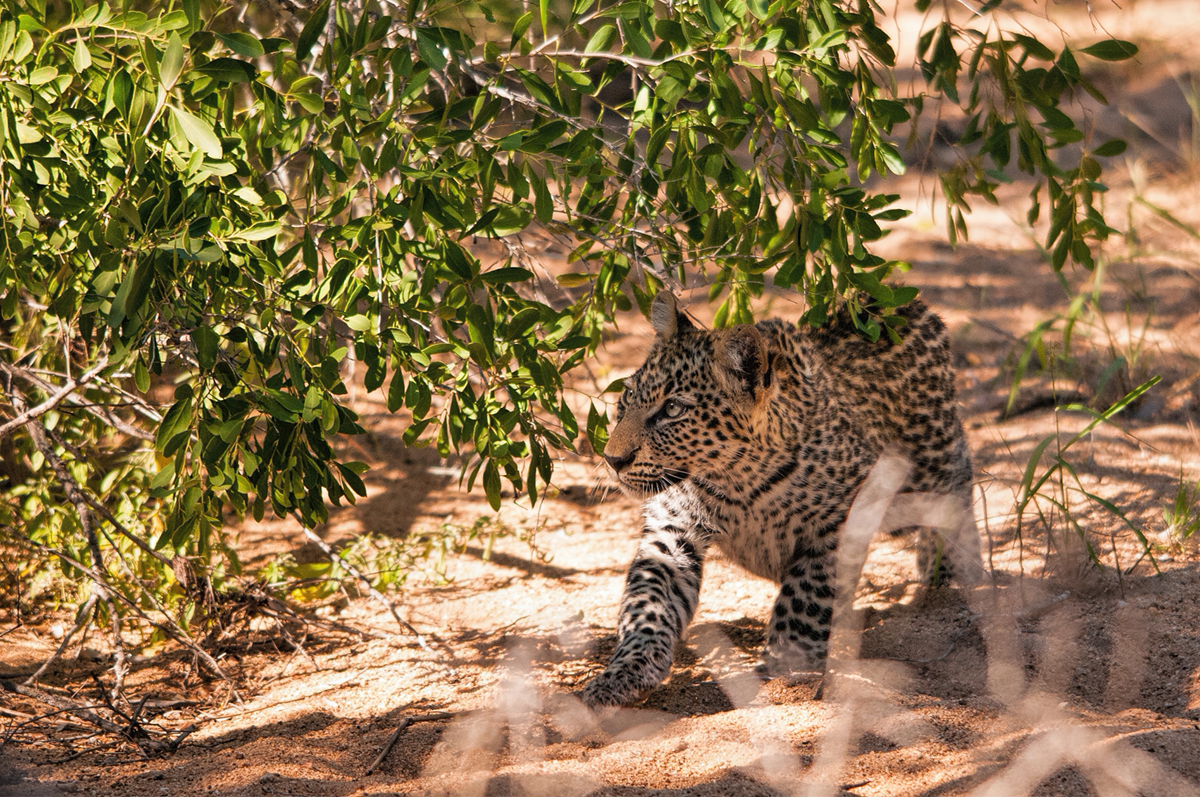 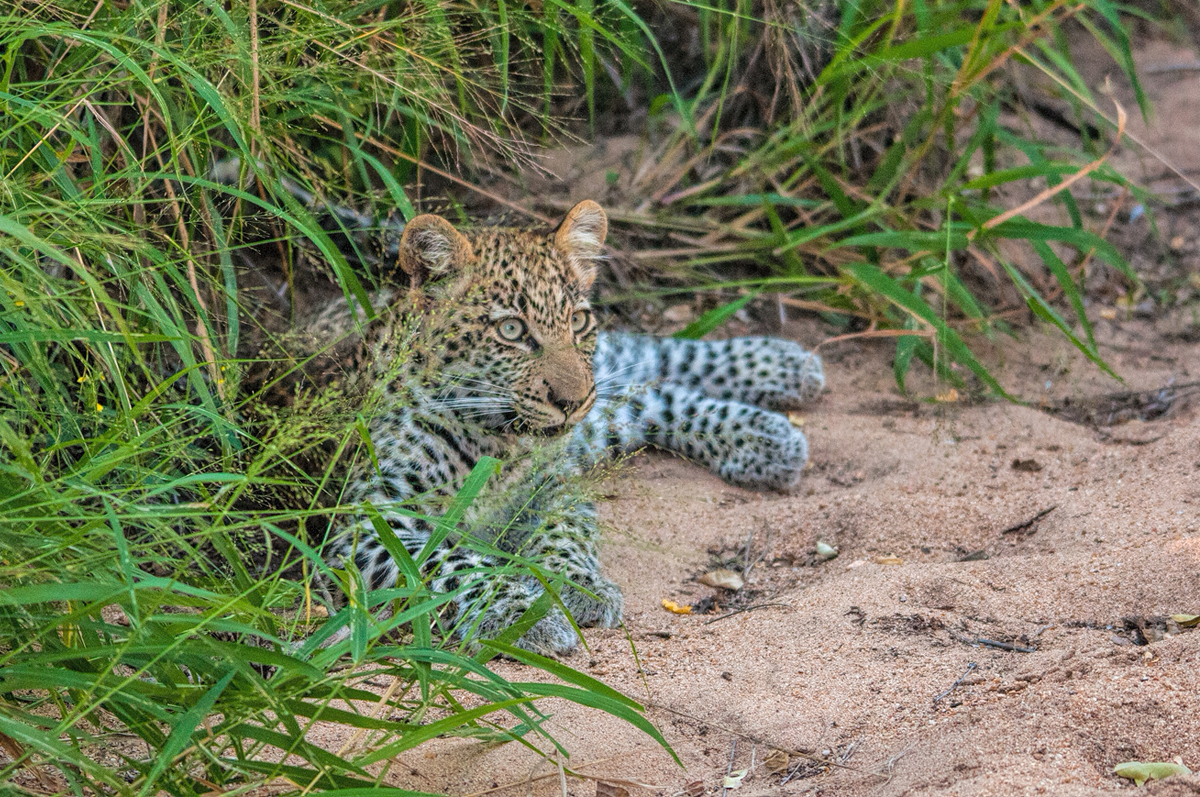 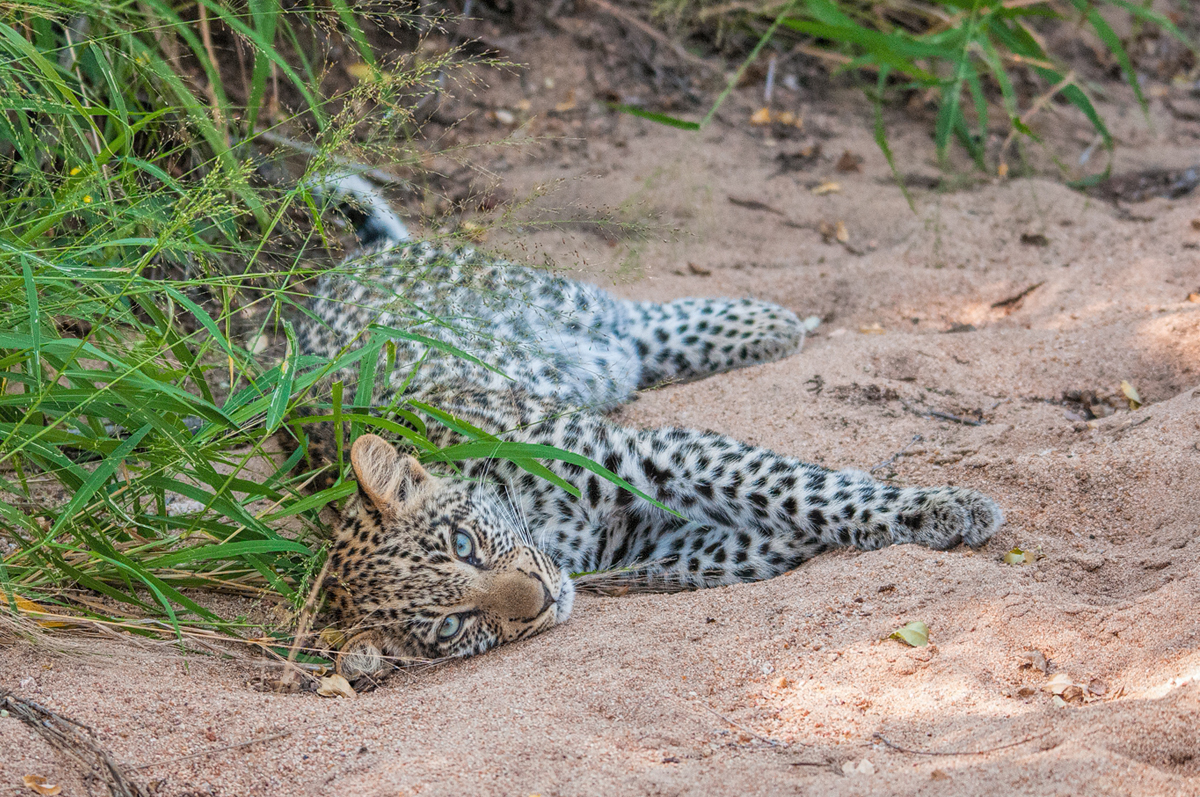 Sheer magic. What a perfect finish to our game drive.

As it turned out, we’d be seeing a lot more of these three leopards over the coming days. But that’s a story for another day.

Over the past eight years I can only recall one visit to Timbavati when we did not get excellent leopard sightings.

Sabi Sand reserve, another private reserve in Greater Kruger Park, is another great place to view and photograph leopards, as is Zambia’s South Luangwa National Park and Mashatu in Botswana.

If you fancy a safari that will bring you close to these magnificent big cats then why not  just drop us an email or phone us.