Depth of Field (or DoF) is one of the most commonly used terms in photography and luckily it’s one that is fairly easy to explain.

Quite simply it refers to the amount of your photograph, from front to back, that is in focus. It is a decision you need to make when considering how your photograph will turn out.

Do you want everything in the frame to be in focus? Or do you want just your main subject in focus and everything else out of focus to make your subject stand out better?

Once you’ve made the decision, how do you implement it?

These 2 images illustrate just how Aperture affects Depth of Field.

In both photos the point of focus is the figure in the middle.

In the first photo, with Aperture set at f2.8, you can see that although the middle figure is in focus, the front one is not.

In the second photo, with Aperture set at f11, not only is the middle figure in focus but the ones at the front and back are much clearer too.

The Relationship between Aperture and Shutter speed

In any given situation, depending on the prevailing light and the ISO you have set, you (or your camera if it is set to Auto or Program) will make a decision about the relationship between Aperture and Shutter speed.

The wider you set your aperture, the more light you allow through to reach the sensor which allows you to use a faster shutter speed. Conversely, if you keep your aperture at a narrow setting, you’ll let less light through and need a slower shutter speed to maintain the correct exposure.

If you want to capture a moving subject and freeze the action you will need to use a fast shutter speed. If you want to photograph a landscape or a portrait and want as much detail as possible throughout your photograph you will want to maximise the Depth of Field. Since the subject is stationary you don’t need a fast shutter speed and so can choose the optimal aperture for your shot.

But why is it that a smaller aperture allows a greater Depth of Field?

Surely, logically, the more light you let through the better it is and therefore a wider aperture should give greater Depth of Field.

It’s all about the angles.

By this I mean the angles created by the light passing through the lens and the angle at which the light hits the sensor. 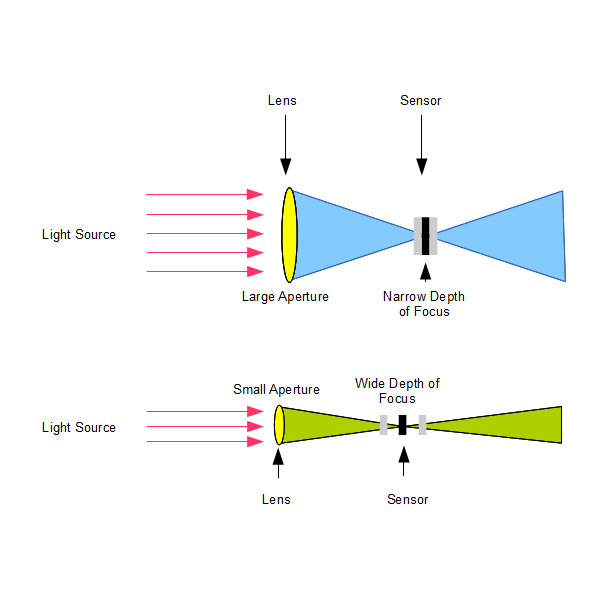 With a smaller aperture the light passing through the lens hits the sensor at a narrower angle than it does with a wider aperture.

As the diagram illustrates, the wider the aperture the steeper the angle created as the light passes through the lens. This means it moves away from the point of convergence much more rapidly than it would with a narrow aperture and focus is lost much sooner.

All lenses have optimum settings. The settings at which they will deliver the best results.

In addition to Depth of Field, the f-stop you choose is relevant to the way your lens performs. Some lenses suffer from distortion. Though often not obvious and rarely serious enough to spoil your photographs there are situations when the distortion becomes noticeable and if you understand the characteristics of your lens you can take measures to avoid those situations.

This does not mean the lens is bad and incapable of delivering great results, it just means you should be aware of its characteristics.

Before you hand over your hard earned cash for a new lens it is well worth reading as many reviews as you can find about the lens’ performance.  An in depth review will cover things like handling, auto-focus performance and will almost always include a selection of test photographs taken under controlled conditions.

These test photos will be used to illustrate the apertures at which the lens performs best and whether or not it suffers from any types of distortion at specific settings.

One of the best websites for lens and camera reviews is dpreview.com.

Buy the best lens you can afford, it’s worth it.

Modern DSLRs with high pixel counts demand good glass. Because of the extremely high resolution of newer cameras they will show up any defects your lens may have.

Now get out there and start shooting.