Daylight on Day 3 showed us a river that looked very different from the night before.

The rhino photo above was taken early evening on Day 2 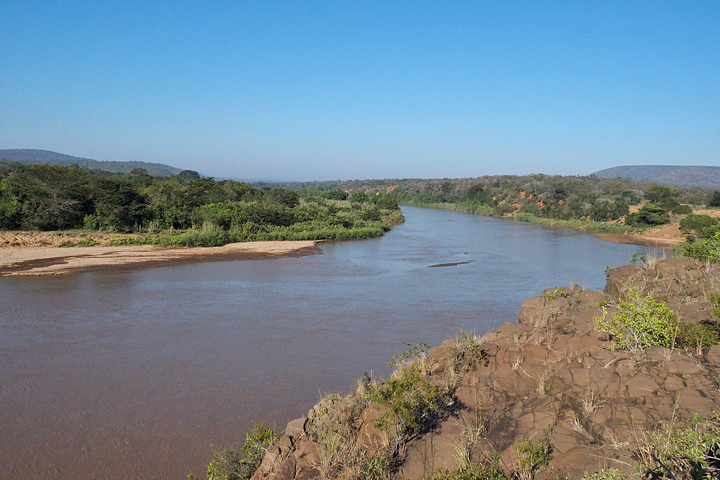 I had a few minutes to spare while the others got ready to leave and so I took the chance to photograph some of the flowers in the rocks by our camp.

I asked Sebelo what these flowers were called and he did give me a name which I promptly forgot. he did say that as kids they had eaten the flowers like sweets.

I have since discovered that this flower is called Huernia zebrina

The Huernias are members of the greater milkweed family, and like their other succulent relatives, their flowers may tend to produce the foul scent of rotting flesh to attract carrion flies to pollinate their flowers. But in some species of Hueneria, this scent isn’t very pronounced.

Other websites refer to it as the “Life Saver Plant” and there are sources that mention it as being used as ‘famine food’ in some countries.

One of our first tasks after breaking camp this morning was to dig some more wells/soaks so that we could replenish our water supply.
This morning’s river was very different from last night’s. Where we had previously had reasonably clear water to work with what we were now faced with was a fast flowing mass of caramel coloured water.
Undeterred by this, Sebelo set about digging for water.
The first water that seeped through was the colour of very weak milky coffee. Not very appealing at all. But with a bit of patience the water quality improved enough for us to fill canteens.

Hiking with our backpacks on again meant that we were all very grateful when we stopped for lunch.

Once again the location was breathtaking – once we had got it back so it could be taken away again.

Sebelo told us this was Shaka’s Rock (obviously one of many named after the Zulu chief) The way he said it, it sounded like Shagger’s Rock and he couldn’t understand why we were sniggering like schoolboys at a smutty joke.
We bunched up in the limited shade available and just wondered at the view. The White Umfolozi certainly looked more like a real river today.

Way down below us we spotted rhino calves grazing and occasional giraffes browsing.

By the time we eventually reached our camp site, another rocky outcrop by the river, there was nothing I would have liked more than a swim but one look at the brown sludge flowing past drove that idea from my mind. Bugs was not nearly such a wuss and practically knocked me over in his rush to get wet.

There was no sand on our side of the river so we had to wade across to dig for water. Even though the water was barely knee deep, the current was strong.

We could see elephants drinking at the water’s edge and at one point, just as I was walking back from the far side there were muted calls and I looked up to see everyone pointing at something behind me. I turned to see a rhino in the bushes, just where we’d been, deciding whether or not to come to the water and drink. I rushed ashore and grabbed my camera and waited, but it didn’t return.
I did catch an elephant crossing the river though.

Although it is still basically all rock, this camp is much flatter and has a better covering of sand than our previous one, which is good news as I have a couple of lovely blisters forming on my feet.  I can walk around the ‘camp’ in bare feet and hope they have hardened up a bit by the morning.

The river is flowing pretty fast now and we see logs and other debris being carried past us. The water is still rising and we speculate how much higher it might reach by morning.