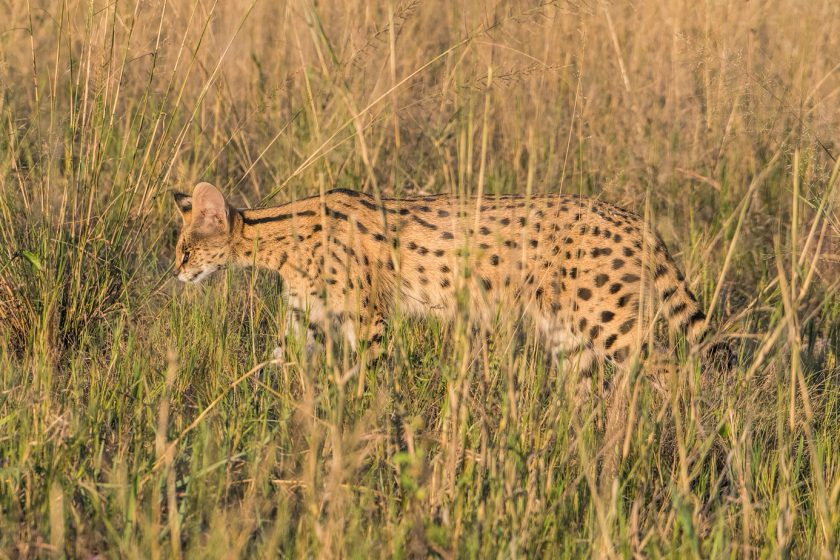 The serval, or serval cat, is one of Africa’s most elegant predators.

A slender, medium-sized cat it is characterised by a small head, large ears, long legs, a golden-yellow to buff coat spotted and striped with black, and a short, black-tipped tail.

Just 54–62 cm at the shoulder it weighs from 9–18 kg.
A serval’s legs are longer, in comparison to the rest of its body, than any other cat and its ears are the biggest.
It puts these ears to good use as a kind of radar to detect the sounds produced by moving animals.

Servals are very successful predators, with a 50% success rate, compared to other cats which average only about a 10% success rate. Their prey consists of rodents, squirrels, frogs, snakes and small birds.

Despite the fact that they often hunt by day, servals are elusive cats. Frequently you’ll catch a glimpse of their distinctive ears, just visible above the tall grass, before they disappear again as it moves stealthily in pursuit of its prey.

We were therefore extremely excited on our recent safari in Zimbabwe’s Hwange National Park when we had the opportunity to watch a gorgeous female serval as she hunted.

We were lucky to see her at all; we rounded a bend in the track to see her back legs disappearing into the long grass.

We turned off the track and waited, scanning the grass for signs of her position. It didn’t look promising; the grass was high and she was walking in the shadows.
Though she was a tall cat, the grass was taller and it was only when she moved through a patch where the grass was less dense that we caught sight of the telltale spots and stripes.

She stopped for a while; even though we knew where she was we couldn’t see her. Then she was up again, ears moving as she searched for sounds. Every few moments she would stop, alert, listening intently, ready to pounce.

Although we could follow her progress through the grass, it was a real challenge to try and get a photograph, with the autofocus switching from serval to grass and back again every few seconds. Each time she stopped we’d try to get a shot, but only parts of her would be visible.

Several times we were certain she was about to pounce but something must not have been right and she set off again through the grass.

Then she stopped and leaned back slightly, keeping her head steady, muscles twitching as she tensed for the leap.

This was it; she propelled herself towards her prey, leaping upwards and forwards. A couple of seconds later it was all over. She didn’t even bother to sit down to eat. She ate standing up and then moved on in search of the next snack.

It may not have had the adrenalin rush of a lion or cheetah hunt, but it was a real privilege to watched such an elegant hunter at work. Equally memorable and a far rarer experience.