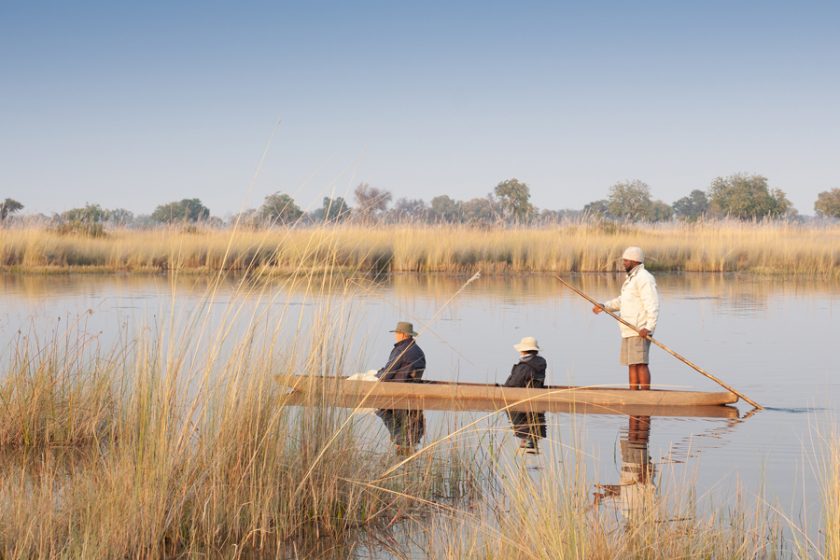 This is the time of year when we start to get a good indication of how good or poor the water levels will be in the Okavango Delta for the summer season. By now, the rains have fallen in the Angola Highlands and it is possible to make some predictions about how much water will be flowing down into the Delta.

In recent weeks we have been receiving updates from our colleagues in Botswana about the current and expected water levels in the Okavango Delta and Chobe River.

This summer, while extremely beautiful in Botswana, has been very hot and dry. The rains have been well below average and unfortunately Angola has also had disappointing precipitation. As a result, the annual flood water has yet to show itself in the Okavango Delta.

Chief’s Island
This means that the channels around Chief’s Island are nowhere near the level they should be at this time and the Boro River channel has not yet filled. Consequently, only very short mokoro activities are being offered to cross the channel in certain places where you cannot walk.
Water is expected any day, but as with every year, we cannot predict exactly when it will arrive. It is safe to say that that the flood is late this year and it could easily be another 6-8 weeks before proper mokoro activities can be offered.

What we can say is that as a result of the scarceness of water sources, the game is exceptional. Guests are regularly seeing lion, hyena, leopard and even cheetah. Wild dogs have been seen along with herds of over 1000 buffalo. Naturally all of the grazers are there sipping from the waters edge and eating the grasses in the molapo. It is a veritable Eden.

Boating activities in these areas are largely unaffected as the water levels in the Xakanaxa Lagoon and the surrounding deep water channels remain high.

Chobe River levels are considerably lower than average. Measurements of the Zambezi River at Katima Mulilo (which usually pushes water into the Chobe) are approximately 4-meters lower than last year. The good news is that the Chobe Riverfront received some late rains over the weekend (40mm).

The poor rainfall has also resulted in the premature start of the zebra migration on the western boundary of the Makgadikgadi Pans National Park – with thousands of zebra starting their annual movements months before the usual time.

The early zebra migration means that the Boteti River Valley is once again a sea of black and white. This means we are in for an intense season of game-viewing for the remainder of the dry season.

The Bottom Line
The bottom line is that, as always, Botswana remains a fantastic place to go on safari. Even though the low water levels may restrict some of the water based activities the up side is that game viewing is exceptional. So what are you waiting for?