When the first African Wild Dog appeared, trotting around the bend towards us, we had no idea of the adventure that was about to unfold. But, within moments, three more dogs followed the first one into view and Neil, our guide, knew straight away, “They’re hunting.”

Up to that point, our game drive had been quite sedate. We’d seen a small herd of impala, a couple of nyala and a lone rhinoceros. All that was about to change. 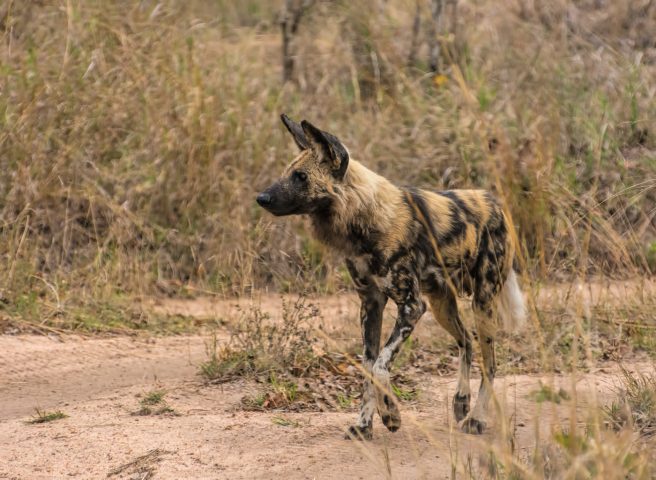 Seeing African Wild Dogs is one of the real highlights of a safari for me and if they are active that is even better.

We’d seen these particular dogs just outside their den earlier in the day and knew that they belonged to quite a large pack that had half a dozen young pups. 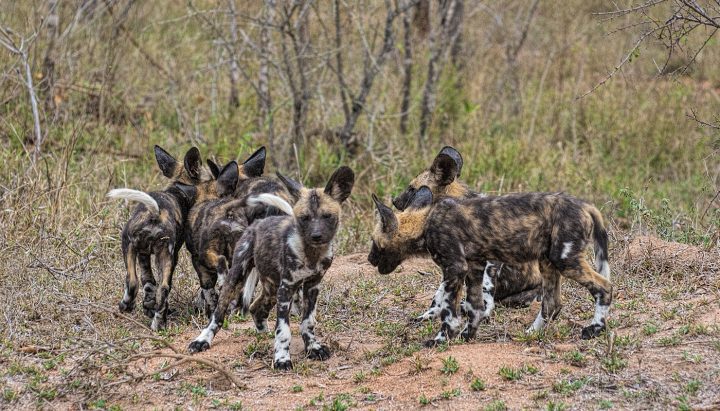 Hunting for the whole pack

Because the pack contained puppies we knew two important things:
1) they would be staying close to the den until the pups were old enough to travel and
2) they’d have to hunt every day to keep the pack fed.

This was good news for us; when they’re on the move wild dogs can cover huge distances which means you’re unlikely to find them in the same spot where you last saw them; unless they are denning.

On one occasion we were out searching for a pack of 17 dogs that we knew was in the area because we’d seen them the previous afternoon. You’d think that locating 17 dogs would be easy, but when we eventually found them they were 9 kilometres away from where we’d last seen them.

Just like other predators, wild dogs do spend a lot of their time lazing around in the shade,  but when there are puppies there is almost always something going on.
Following wild dogs when they are hunting is a real thrill. Just trying to keep up with them is a challenge.

Lions and leopards hunt using stealth, using cover to get close to their prey, saving their energy for a final rush; cheetahs chase down their prey on the open plains using their great speed in bursts, but they cannot maintain it for long.
By comparison wild dogs are much more like a long distance runner than a sprinter; once they have locked onto their prey they just keep on pursuing remorselessly until their prey is exhausted.

We waited until these four dogs had passed us then turned to follow them. They were heading towards the small herd of impala that we’d seen just minutes earlier and, sure enough, it didn’t take the dogs long to spot the impala.
It was fascinating to witness their tactics. They’d been trotting almost in single file when we sighted them but, now that there was prey in sight they fanned out. There was no attempt at stealth, they just kept moving towards the impala, gradually picking up speed.

By now the impala had sensed the threat and they began to run.

Although lions hunt as a pride, their methods are very different from those of wild dogs. Lions will identify their target animal and then all those involved in the hunt will work together to surround it and bring it down.

When the impala started running the dogs followed, but instead of all four dogs following one impala, they each chased a different one. So, to begin with, there were four wild dogs chasing four separate impala in completely different directions.

The chase was taking place through dense bush, so it was a real battle to try and keep even one of the dogs in sight, but we managed it; Neil flinging the steering wheel from left to right, right to left, dodging trees and bushes as we charged through the forest. Julius our tracker, in his seat on the bonnet, was clinging on for dear life, although I’m sure this wasn’t the first time Neil had taken him on a ride like this.
To the left we could still see a couple of the dogs galloping along, another was away to our right.

Luckily Sabi Sand is a private reserve and we were able to leave the marked tracks to continue our chase. If we’d been in the National Park we’d have had no chance of following the hunt. 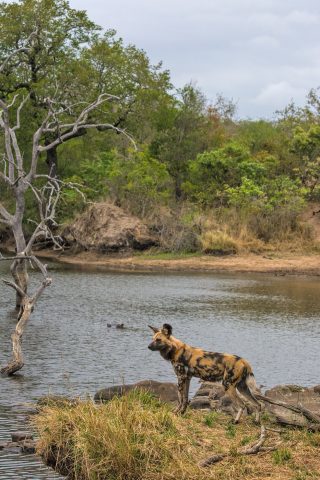 Every few minutes we’d lose sight of the dogs and have to stop; listening for sounds that would point us in the right direction.

After a while, it became clear that there were no longer four separate chases; we saw one then another of the dogs standing still, ears pricked. They had given up their individual pursuit and were listening for signals that would tell them which way to run to join what was now the sole ongoing hunt.

Somehow, whilst these dogs were running through the bush, each pursuing their own quarry, they were able to keep track the progress of the other three dogs. And so, four hunts gradually became just one.

We didn’t see the actual moment of the kill. We knew it had happened, but we just couldn’t find a quick way to get to it and had to backtrack until we found a path through the bush.

When we caught up with the dogs, perhaps four or five minutes later they were literally tearing the impala apart. Unlike lions, that will take their time to devour a kill, wild dogs eat in a frenzy. They just start ripping the prey to pieces, not concerned whether it is even dead or not.

From the time that our four dogs brought down their impala, it took them no more than fifteen minutes to leave nothing but skin and bones.

There’s a reason for this; once the hunters have eaten they will return to the den and regurgitate food for those members of the pack that did not take part in the hunt. With a large pack, it can be necessary for wild dogs to hunt more than once a day to keep them all fed. The African wild dog (Lycaon pictus), also known as cape hunting dog, African hunting dog, African painted dog, painted hunting dog or painted wolf, is a canid native to Sub-Saharan Africa. (the canid family includes wolves, jackals, coyotes, dingoes and domestic dogs)
It is the largest of its family in Africa, but is distinguished from all other dogs by its fewer toes (only 4 on each foot) and its teeth, which are highly specialised for its diet, which comprises more than 70% meat.

It is classified as endangered* by the International Union for the Conservation of Nature (IUCN) as it has disappeared from much of its original range.
The decline of these populations is ongoing, due to habitat fragmentation, human persecution, and disease outbreaks.

The African wild dog is a highly social animal, living in packs with separate dominance hierarchies for males and females. Uniquely among social carnivores, it is the females rather than the males that scatter from the natal pack once sexually mature, and the young are allowed to feed first on carcasses. The species is a diurnal hunter, specialising in antelopes, which it catches by chasing them to exhaustion. Like other canids, it regurgitates food for its young, but this action is also extended to adults, to the point of being the bedrock of African wild dog social life.
It has few natural predators, though lions are a major source of mortality, and spotted hyaenas will frequently steal a kill that ild dogs have made.

*An endangered species is a species which has been categorized as very likely to become extinct.
Endangered (EN), as categorized by the (IUCN), is the second most severe conservation status for wild populations in the IUCN’s schema second only to critically endangered (CR).

If you’d like to make African Wild Dogs one of the highlights of your next safari then just drop us an email or phone.