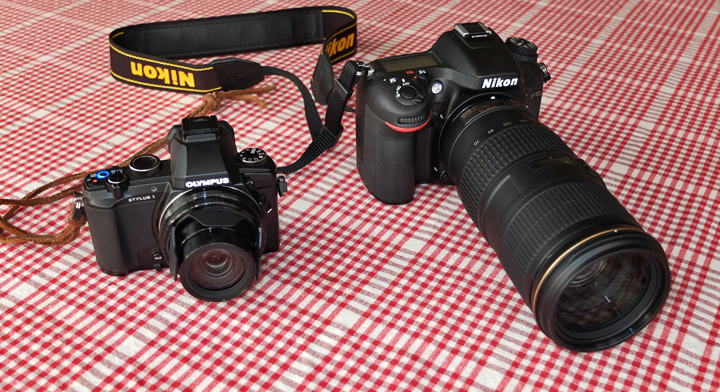 When I made the leap from 35mm cameras to my first DSLR in 2004 there was never any real doubt that it would be a Nikon. After all, Nikon had served me well for about 15 years and it meant that I could keep on using my favourite lenses.

Now, more than 10 years later, I am still in love with my Nikons. The bodies do pretty much everything I want them to and the lenses are just fantastic but – yes, there is a ‘but’ – but I often wish that I could travel lighter.

For years now I have been resigned to the fact that my camera bag weighs more than my check-in bag and that I have to hold my breath every time I take a light aircraft flight to one reserve or another, and hope that no-one asks how much my camera bag weighs.

Often I have browsed around camera shops looking for a way around this dilemma; how can I reduce the weight without compromising on image quality. In the end I always come to the same conclusion; for what I want there is nothing to beat a DSLR.

Late last year though, in a rare moment of clarity, I realised that there were occasions when I did not need to take the kitchen sink with me. If I was just going away for the weekend with little likelihood of finding wildlife to photograph there was no reason to take so much gear.

Long story short.
After checking out the various options, I bought myself an Olympus Stylus 1.
On my first trip overseas I hedged my bets and took it as a second camera to accompany a single Nikon DSLR and a couple of lenses. Encouraged, and greatly reassured, by the quality of the images I was getting with this little camera I started taking it with just about everywhere. Including trusting it as my only camera on a walking safari in South Africa. It was so liberating.
I wrote a sort of ‘field review’ in May 2015.

Keen to find out just how far I could use it as a substitute for my DSLRs I invested in a 1.7x converter that gave me an effective focal range from 28mm-510mm.

By November 2015, after successful trips in the UK, I had no hesitation taking the Olympus along as my only camera for a trip to South Africa. I knew that although there would be plenty of wildlife to photograph, it would not have to stand up to the demands of a full on safari.

So far, this little camera has handled everything I’ve asked it to. What more can I ask?