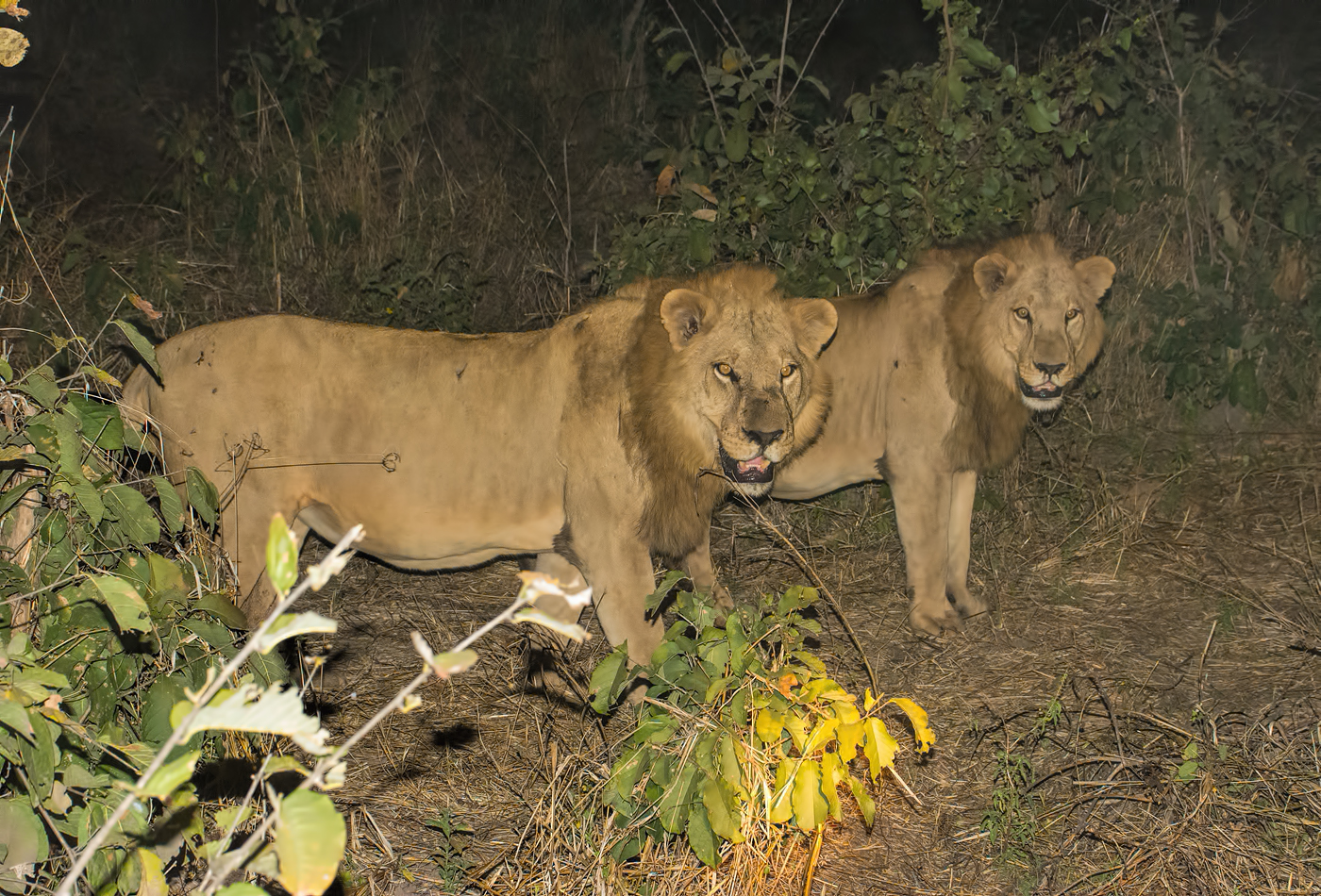 It’s late May in Botswana’s Linyanti Marsh, the bush is thick and green. The waterholes created by last season’s rains are dwindling, but the currents in the swamps are flowing strongly as water flows in from the north west.

We’ve spent hours following tracks, hoping to catch sight of the lions that made them. Another vehicle from the camp is a couple of kilometres ahead of us, where the tracks are much fresher, but they are having no better luck.

This could go on for hours, the temperature is steadily rising and any sensible lion will be seeking the shade, if it’s not already there; so it’s time to review our strategy.

Paul, our guide, tells us that the most recent spoor has been seen close to the airstrip, about 1 hour from camp, so we’ll abandon the lions for now and then head over there after dark and find them then.

I’m not a big fan of night drives but Paul says it with such confidence that we all agree.

No sooner have the plates been cleared from the dinner table than we are all hovering around Paul’s vehicle, eager to depart.
The temperature has dropped significantly by the time we set off. There isn’t much conversation as we all know that we’ll be driving for about an hour before we start searching in earnest for these elusive lions.
No other light penetrates the darkness, we are the only vehicle out there tonight.

The bush opens up a bit and eyes wink back at us in the spotlight. Spring hares, hopping like miniature kangaroos, retreat across the plain.

We reach the airstrip and Paul stops the car, switching off the engine so we can listen.

We hear roaring, and it’s not far away. We move slowly alongside the runway, scanning the bushes.
The light picks out a shape; it’s a male lion. He’s got a dark mane and only a stump of a tail. Paul tells us that this is Stump Tail, one of three brothers who make up a coalition that control this territory.

He’s moving purposefully and disappears into the bush. We try to find a way through that will let us intercept his route.

A quick stop to listen, then deeper into the bush.
There’s movement, 2 lions this time. At first we think it is his brothers, but no, these two and much younger. Also part of a 3 brother coalition.

Now we begin to understand what is happening. These younger lions have sensed that Stump Tail is alone and are staging a coup to take over the territory.
The three resident males are much too powerful for them to challenge when they are together but, if they can get one of them alone and finish him, that would significantly shift the odds in their favour.

Sure enough, a few moments later we see all three of them together.

Stump Tail has moved away and is roaring again; calling to his brothers to come to his aid.

It is a gamble. Calling out makes it much easier for the interlopers to locate him, but he knows that if his brothers can get here quickly enough they can easily see off the challenge of these younger lions.

We hear Stump Tail, calling again, further away now, and the three challengers head off in pursuit.

There is no way we can follow them through the bush so we drive back out to the airstrip and patrol the tree line, listening for sounds that will tell us where they are.

There, movement in the bushes at the end of the runway. We’re off. We get to the end of the airstrip and there is nothing in sight, except fresh spoor that indicate lions have been on this track. Paul speeds up. The tracks continue along the road. A little faster. The tracks are still there but no sign of the lions. Surely they can’t have come this far.

Suddenly we are racing along; ahead of us there is dust in the air; kicked up by running lions.

We cling on as the Land Cruiser bounces along at 40kph. The dust is getting thicker, we must be close. We almost miss them. The three predators are a few metres from the road, panting heavily. Not surprising, they had been running flat out for several minutes which is not something they would do very often. 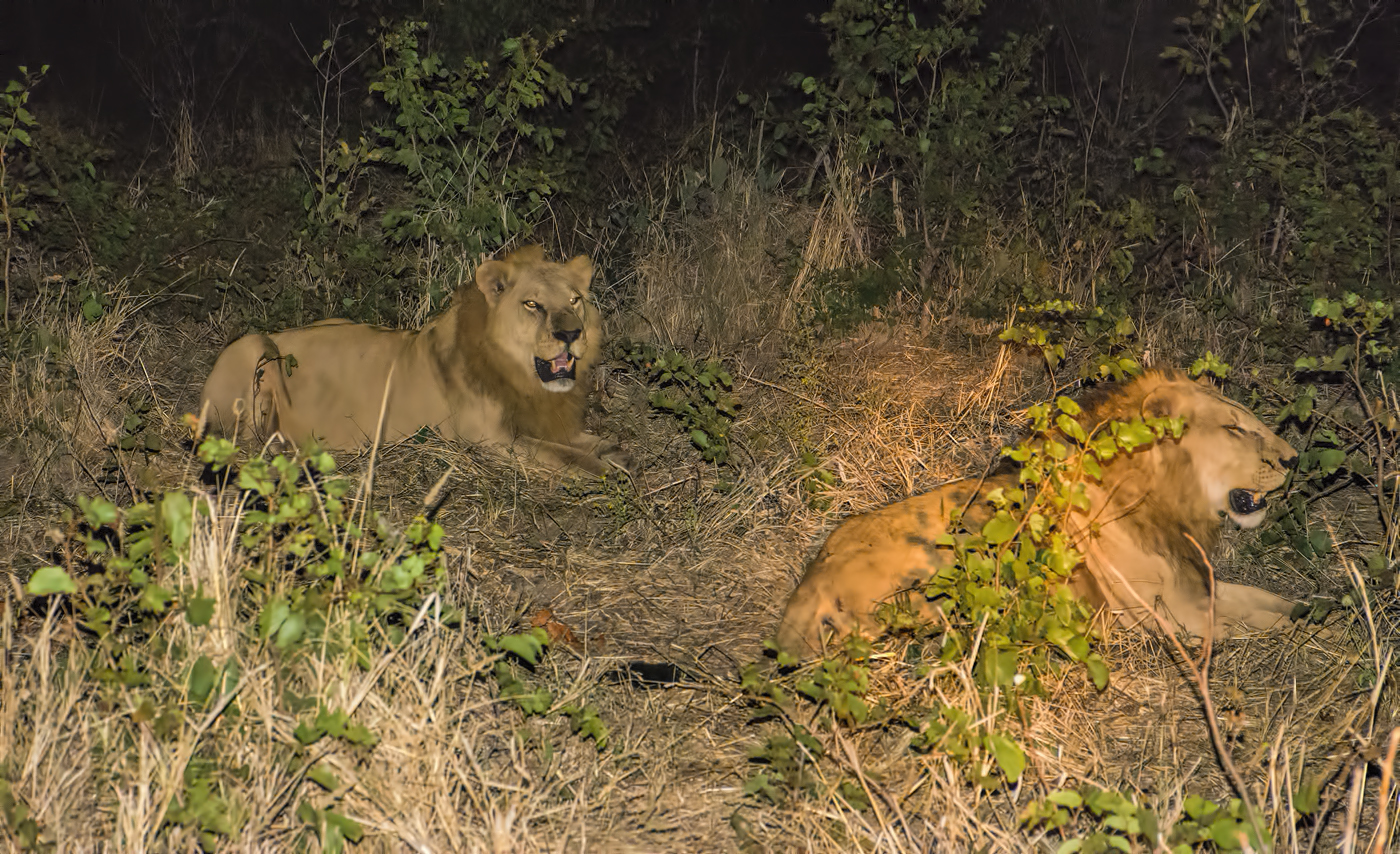 Stump Tail roars again; they barely raise their heads. Right now their energy is spent and they don’t seem as confident as they were 15 minutes ago. This isn’t going as easily as they’d expected.

For them to have any real chance of taking over the territory they needed to overpower Stump Tail. Chasing him off is not a victory. Once he regroups with his brothers they will come back and the younger males will be forced to retreat.

Eventually they start to move again, still in the direction of Stump Tail but they’re walking not running, as if they know that they have failed; this time. 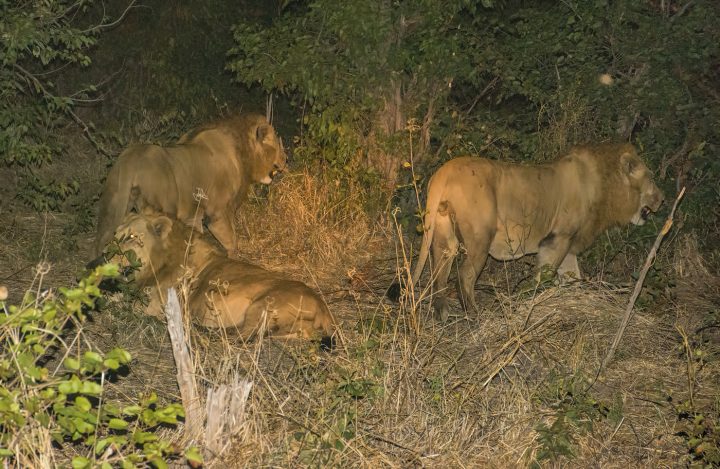