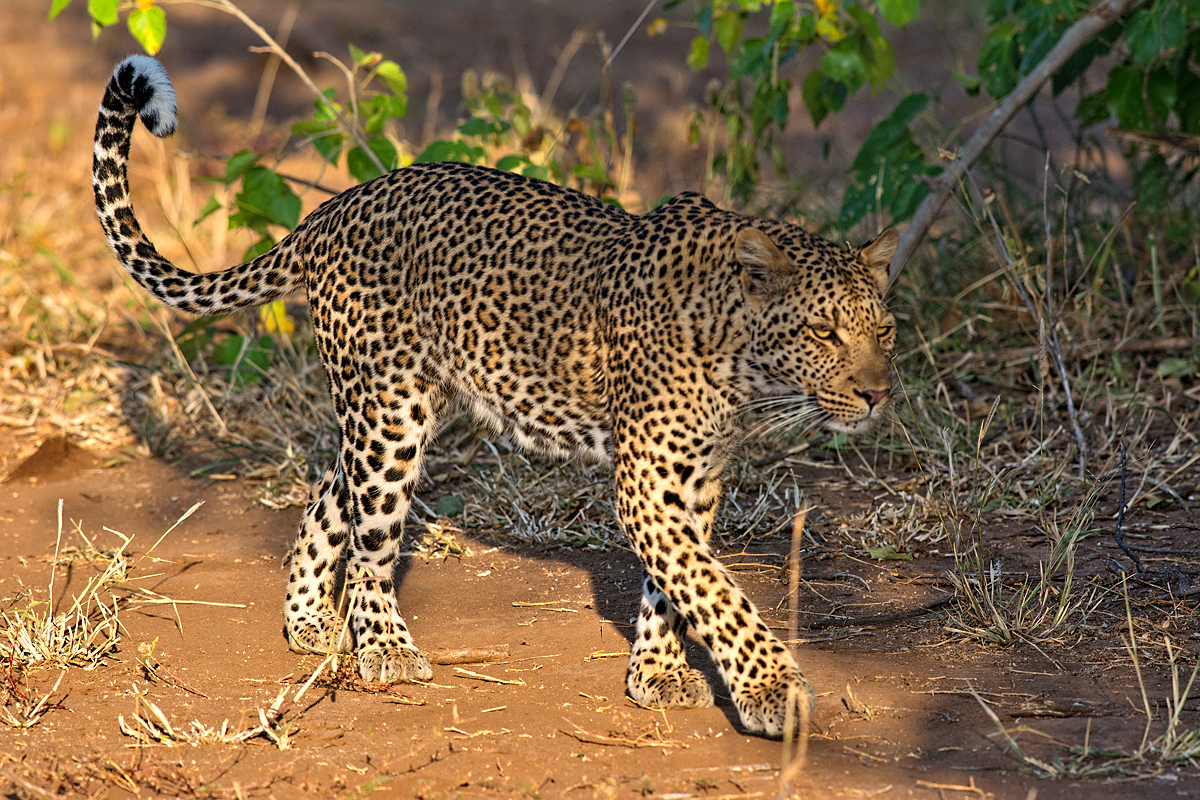 A leopard is without doubt one of the animals I enjoy watching most on safari, along with cheetahs and wild dogs. So there was a real sense of excitement in our vehicle when our guide said one had been sighted quite close to where we were.

It was hard work ploughing along the dry river bed, for our 4×4 that is, not for me. I was just sitting there with my camera at the ready.
The dry sand and stones sucked at the tyres as we made our way slowly to the spot where we hoped to find a leopard.

At first we thought she must have disappeared back into the bush, but then she sat up, disturbed by the sound of our labouring motor; a few guinea fowl feathers protruding from her mouth were all that remained of her most recent meal.

When she made her way into a thicket we expected her to relax for a while after her meal and stay there until late afternoon. But we decided to wait around for a few more minutes anyway; just in case.
It was worth it.

For a few minutes all we could see was the occasional movement of branches, accompanied by the rustling noises, then she emerged from the bushes and, after giving us a careful stare, walked along the bottom of the river bank before climbing up the bank itself. 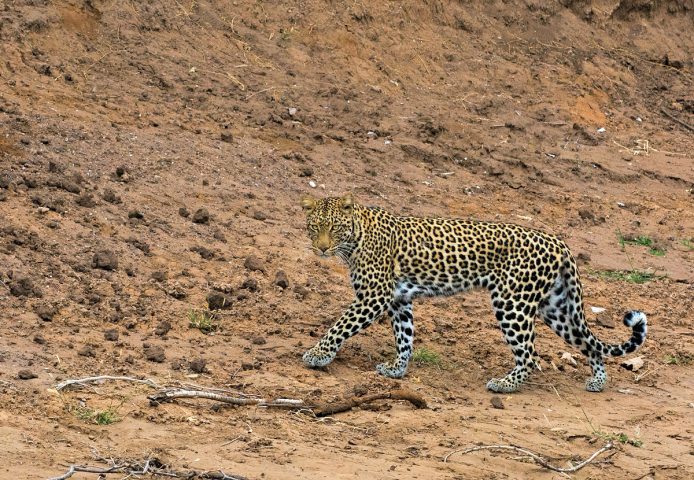 As she neared the top she paused, fully alert. Something had caught her attention. For a short time she just stood there, motionless, assessing the situation. 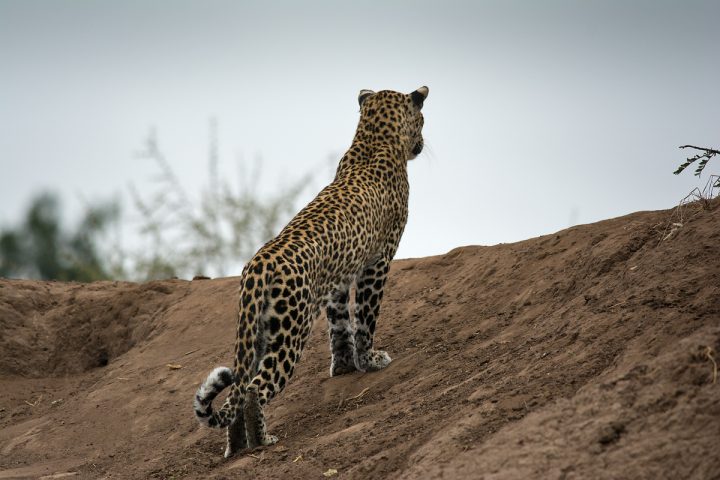 While she did that we drove as quickly as the soft ground allowed, looking for a way to get out of the river bed and up onto the top of the bank, so we could see what she was up to.

By the time we had made it to the top and then driven around to where we’d last seen her, she was already on the move. She wasn’t just walking, she was stalking something; although, as yet, we had no idea what it might be. 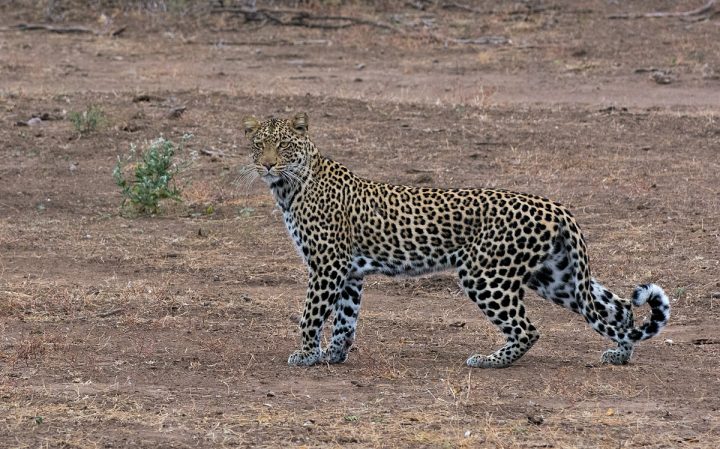 Crossing in front of us she ducked into the cover of some bushes and sat down. 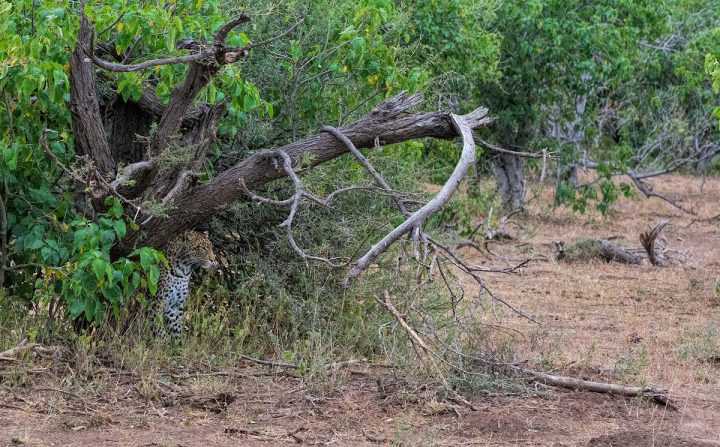 We circled around, careful not to get between her and whatever she was focussed on.

It took us a while, but by following the direction of her gaze we finally saw what had caught her attention. It was a steenbok, sheltering from the wind behind some fallen branches. 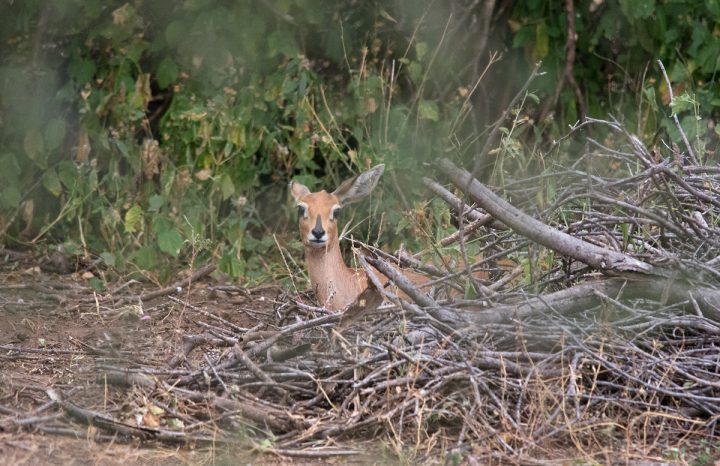 Although the leopard had managed to spot the steenbok, it had not seen the threat and had no idea it was being lined up as the cat’s next meal.

The distance between them was about 75 metres and there was no cover that the leopard could use to get closer. Her only option was to sit and wait, and hope that the steenbok moved in her direction.
We positioned ourselves at a discreet distance from hunter and prey, making sure that we could see them both whilst leaving a clear line of sight between them, and settled in for the wait. We were lucky today because it was

For a while, quite a long while actually, nothing happened. The leopard just sat there, gazing intensely at the steenbok and the steenbok continued to huddle down behind the fallen branches, oblivious to the fact that it was being targeted as the leopard’s next meal. 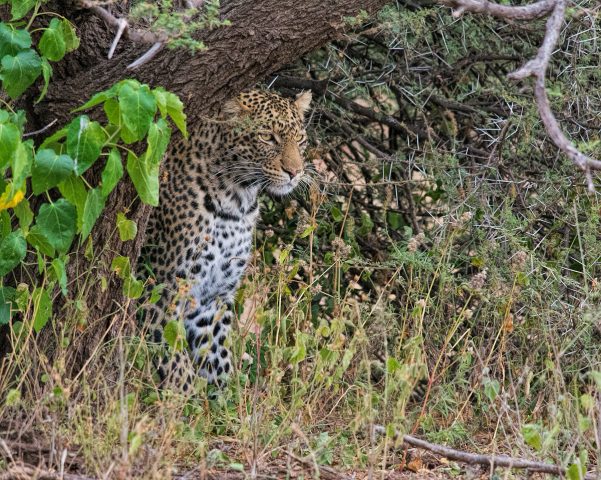 By now our guide was looking at his watch; gently reminding us that we should think about heading back to camp for breakfast.
No way. We were going to stay with this until something happened.

Eventually it was a couple of Meve’s Starlings that tipped the balance. 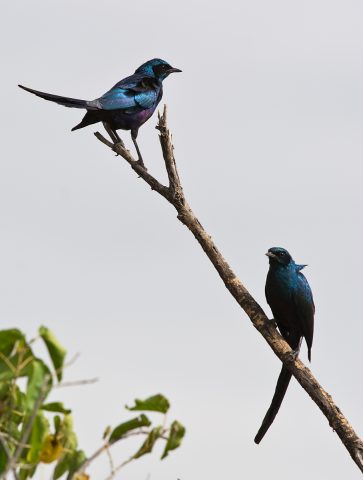 They had seen the leopard and, taking it upon themselves to announce her presence, they settled on a dead branch above the bush where she was hiding and started squawking.
The leopard looked up at them in disgust, fully aware that they had just blown her chances of a kill, but there was little she could do about it. 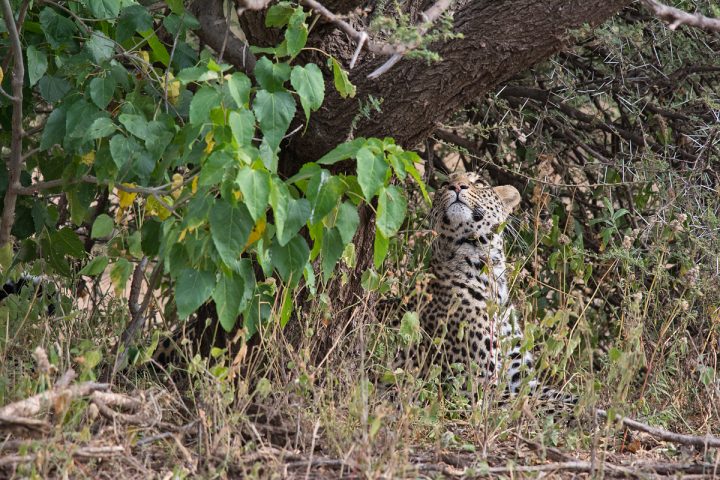 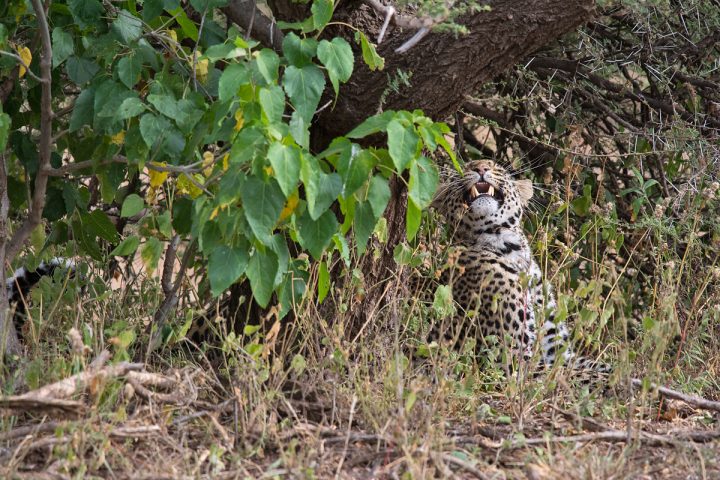 Alerted by the starlings, the steenbok finally spotted the danger and made a swift escape in the opposite direction.

So, no kill for us this morning. Even so, the whole encounter had been fascinating.
What really stuck in my mind was how early the leopard had sighted the steenbok. She began stalking it from a distance of at least 150 metres. At that distance we could not even see it without binoculars.