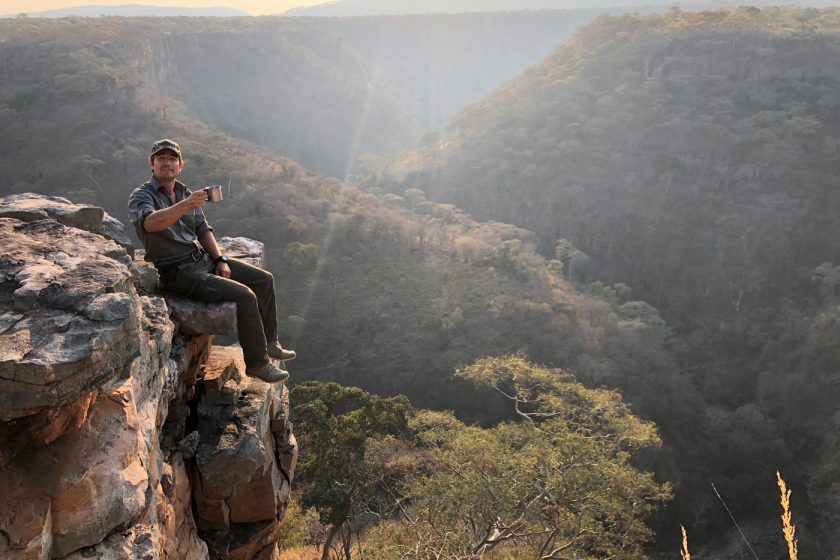 The first two instalments of our interview with Dr Niall MCCann, founder of National Park Rescue have got quite a few of you reaching for your maps of Zimbabwe, wondering exactly where Chizarira National Park is.

It certainly isn’t one of Zimbabwe’s better known parks so we thought a bit of background information would be useful as you read the interview.

At 2,000 square kilometres (490,000 acres), Chizarira National Park is the third-largest national park in Zimbabwe, and also one of the least known because of its isolated location in northern Zimbabwe, between Hwange NP to the south and Matusadone NP to the north. The scenery is majestic but once good wildlife populations have suffered badly from poaching in recent years.
The park’s remoteness and the lack of lodges and safari operators in the park has meant few visitors which has given poachers free rein. The park has suffered as a result.

Chizarira was declared as a non-hunting reserve in 1938 and as a game reserve in 1963; it was given National Park status under the Parks and Wild Life Act (1975).

The name of the park comes from the Batonga word chijalila, which translates into English as “great barrier”, referring to Zambezi Escarpment, of which Chizarira’s rough terrain forms a part.
The escarpment falls steeply some 600 metres (2,000ft) t o the Zambezi River valley floor and offers magnificent views towards Lake Kariba, 40 kilometres (25 mi) north. Rivers such as the Mcheni and Lwizikululu have cut almost sheer gorges in the escarpment.

Chizarira National Park, plays host to most of the expected plains wildlife as well as megafauna such as African elephant, lion, leopard and buffalo.
Chizarira has a large variety of bird life and hundreds of species have been sighted within the Park. Rarer species recorded include the Livingstone’s Flycatcher, Yellow-spotted Nicator, African Broadbill, African Emerald Cuckoo and the elusive African Pitta. Taita Falcons also breed within the park

Chizarira was declared as a non-hunting reserve in 1938 and as a game reserve in 1963; it was given National Park status under the Parks and Wild Life Act (1975).

For more background information, and an idea of what it is like to actually visit Chizarira, this blog post from Tracks4Africa is well worth reading.

Chizarira: A National Park under rescue
“Zimbabwe’s Chizarira National Park is renowned for its untouched wilderness and dramatic views, but for many years seemed sorely neglected. Now efforts are afoot to restore the park to its former glory. Words and photos by Johann Groenewald“

The Tracks4Africa community of Africa nomads are experienced overland and self-drive travellers who love to share their experiences and help to map Africa.
They truly love and respect Africa and its peoples and natural resources and  share ideas on how  to plan your trip, what equipment you need to travel into Africa and how to navigate yourself to wherever you want to be.

If you’d like to include Chizarira NP as part of your Zimbabwe safari we’d love to help you make it happen. Just email us or phone us.
Click here to Email Us