Part 4 of my latest Safari Diary

A game drive in the Stanley & Livingstone Private Reserve

Mike told us that of the 8 rhinos that needed to be caught and treated they had managed to entice all but one.

This lone renegade was a young male who had steadfastly refused to come anywhere where they could catch him. He also needed to be de-horned.

We were all set to stop for a morning coffee but Mike decided that it didn’t feel right. He was worried about the proximity of the lions. So we drove for a further 5 minutes to another spot where Mike made a bit of a show of asking us to wait in the vehicle while he got out his rifle, chambered a round and then walked 10 metres, turned around and walked back. He declared that it was safe.

Maybe he just wanted to show any lions lurking in the bushes that he had a big gun and it was loaded.

The countryside around us was rolling hills, covered in mopane and other stunted trees.

We saw a shape on a distant hillside. It was a lone rhino. In fact it was the elusive young male and we could see that his horn was pretty fine. He trotted down into a valley and was lost from sight.

We asked Mike if he would be notifying the anti-poaching unit that he’d spotted the elusive rhino. He said he would tell them but as long as it stayed in the area he was in they would not be able to capture him.

No sooner had we (well Mike actually) restarted the engine than we spotted a lone sable antelope about 200 metres ahead or us.

We were keen to try and get closer so Mike let the vehicle roll slowly down the hill towards the sable.

We could see it was watching us and would run for cover as soon as we got too close.

Unfortunately it was standing with its muzzle obscured by a bush. I took a couple of shots just in case it was the only chance I would get.

Then we inched across the track looking for a clearer view.

The sable decided that he’d let us get close enough and bolted. Shame.

On our way back to Ursula Camp we saw quite a few kudu but not much else.

The last part of our drive through the magnificent Acacia albida trees was very picturesque.

After a massive and scrumptious breakfast the chef came to ask us what we’d like for lunch. No chance of going hungry here.

Our plan was to go into Victoria Falls this afternoon, so that those who’d never been before could walk around the falls. I planned to do a bit of shopping – I’d already been given the drinks order – and then relax at the Victoria Falls Hotel with a nice cold beer.

With a few hours to spare I sat on the terrace to see what wildlife would visit the small waterhole in front of the lodge.

In addition to the ever present baboons, I was rewarded with some female kudu and a lovely little bushbuck.

I also wanted to see if I could get any worthwhile photos of the Red Headed Weaver that was nesting outside our chalet. 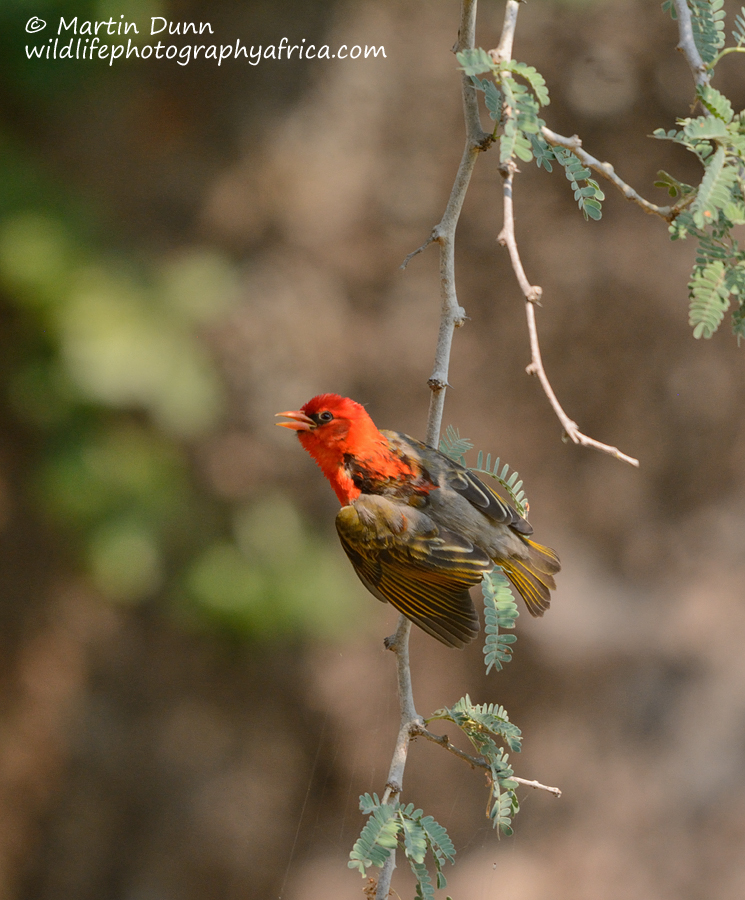 In addition to the beautifully coloures male, I also managed to capture the female as well. No red on her at all.

I also had a go at photographing the Fork Tailed Drongos that seemed to be everywhere. Getting good photos of black birds has never been a strong point but on this occasion the hazy light actually helped by dramatically softening the contrast. I also found a couple of Drongos that were not totally black which suggests they were probably juveniles.

It’s a few years since I was in Victoria Falls and it was clear to see that the intervening years had not been kind. It just didn’t have the same vibe that I remember.

Once I’d bought the required alcohol I strolled past a row of newish shops selling tourist souvenirs and made my way to the splendid Victoria Falls Hotel.

Even though it was clearly in need of a bit of TLC it was nonetheless magnificent. Just sitting on the terrace looking at the bridge with a cold Zambezi in front of me was lovely.

A great place for people watching.

I wasn’t totally idle. I managed to fit in a meeting with Brent and Laura from Travel Wild, my local agents while the others enjoyed gin & tonics on the terrace.

There were 2 nice surprises waiting for us when we got back to Ursula Camp.

The first was that Olivia had set out our table for dinner under the trees instead of inside. The second was that the 2 guests who were supposed to be arriving that afternoon had cancelled. I know that sounds terrible – they may have been lovely people – but it we all appreciated having the place to ourselves.

It didn’t take us long to discover that one bottle of gin makes 12 gin & tonics. I’d paid $10 for a bottle in the supermarket, the night before we had been paying $8 for just one G&T.

Olivia and Mike had been so accommodating that even though we had bought our own wine for dinner ($9 a bottle in the supermarket vs $28 a bottle from the lodge) we bought our first bottle from them anyway. It just meant that we had to drink an extra bottle. Between 6 of us that was not much of a challenge.

After breakfast we sat waiting to be picked up for a helicopter flight over the Victoria Falls.

We were supposed to be picked up at 7:30 for an 8 o’clock flight. By 8 o’clock there was no sign of our transfer.

A few phone calls eventually resolved the issue. Even though we had booked our flight for this morning, the helicopter company had us booked in for the following morning.

30 minutes later a minibus arrived and we were driven to the helipad, which was actually just on th eother side of the river bed from Stanley and Livingstone. If we could have driven straight there it would probably have taken 5 minutes. As it was we had to drive out to the road, cross the river bed and then drive back down a dirt track to the helipad.

We were the only passengers there and the check-in procedures were carried out rapidly. 10 minutes later we we in the air.

I had been concerned that the Falls might not have much water flowing at this time of year but in fact a far bigger problem was the heavy haze that hung over the whole area. It made visibility very poor indeed.

Despite that, everyone still found it a fantastic experience and seeing the Falls from the air helped them better understand the geography of what they’d explored on foot the previous afternoon.

Back at Ursula Camp we said our farewells to Olivia and Mike then hit the road for Hwange.

Our next stop would be Halfway House (halfway between Victoria Falls and Bulawayo) where we’d transfer to a game vehicle for the second part of our journey into Bomani Tented Lodge.

The road was reasonable, until we hit the toll section when, presumably because we were paying for the privilege, the road deteriorated into a continuous succession of potholes.

Even the police checkpoints couldn’t relieve the tedium of the drive. It was dull and the only thing to photograph was the stinky bus in front of us.

At Halfway House we changed vehicles and drove a further 90 minutes through community land to Bomani Tented Lodge. Even though we saw plenty of evidence of elephants (poo) we saw no animals at all ad the drive was as ‘boring as batshit’.

We were all pleased to reach Bomani.