We woke to a cool overcast morning.

Leaving the lodge via the back road, the first animal we saw was a lone female Kudu. Something had clearly alarmed her but we couldn’t see what it might be.

Julius, our tracker,  pointed over the where a group of buffalo were lying together in the grass. As we made our way towards them we saw a few zebras with one young foal, perhaps 3 weeks old.

When we got closer to the buffalo we realised that this was in fact a large herd of more than 100 animals; spread out among the bushes, all of them lying down. Normally a herd like this would have had me clicking away but the light was so dull that it was hard to pick out any real detail.

The radio chattered and within moments Neil had turned the vehicle around and was heading back the way we had just come.

Paddy, one of the other guides who was following shortly behind us, had seen a cheetah approaching the track that we had just driven along. That must have been what was keeping the kudu alert.

The cheetah had his eyes focused on a bunch of impala that were grazing idly about 100 metres away. There wasn’t much cover between him and the impala so he sat down and waited for them to cross over the ridge created by the old railway line.

As soon as the impala had disappeared behind the ridge the cheetah got up, had a good stretch, and trotted towards the ridge.

(( Please excuse the poor quality of the photographs. I am travelling with an old laptop and cannot do proper processing. I’ll edit the diary when I get home and post better quality images))

Not wanting the presence of our vehicles to spoil the hunt, we gave all the participants a wide berth and crossed the ridge some distance away. Reaching the other side we saw the impala running away. We couldn’t work out what had spooked them. It wasn’t us and there was no way they had spotted the cheetah, so their sudden burst of energy was a mystery.

The cheetah sat down on the ridge, clearly surprised to find that the prey he was stalking was a lot further away than he had expected. 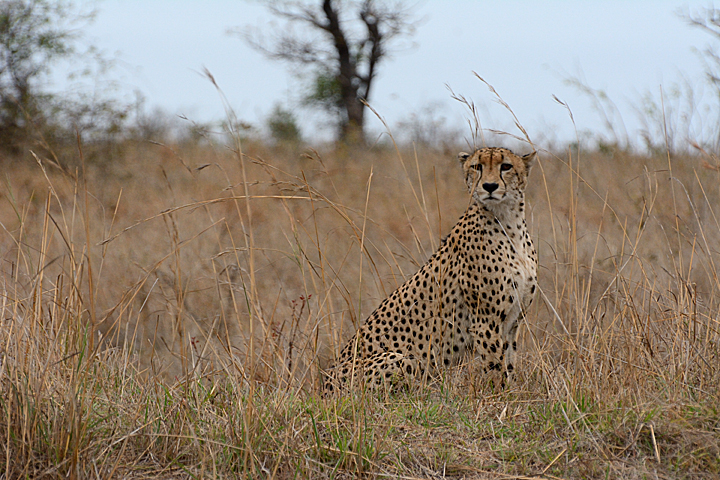 Eventually, he made a decision and began to circle around to where he thought the impala would be going.

They stopped in a clearing on a low hillside and we watched as the cheetah crept forward, using a large tree as a blind.

His patience was admirable and soon there was just 150 metres between the hunter and the hunted.

The impala looked around nervously, as if they could sense a threat but didn’t know where it would come from.

Then one of them broke from the group and ran down the hill towards us. We thought she must have seen the cheetah but then she changed direction and began running straight towards the waiting big cat.

The cheetah couldn’t believe his luck and turned to chase this young impala. The impala suddenly realised the danger it was in and spun round and raced down the hill with the cheetah now in close pursuit.

It should have been no contest. The cheetah only had to make up 30 or 40 metres to catch the impala but he didn’t manage it. After a short chase he broke off and sat down.

He looked across to where the remaining impala were still grazing; somehow they had missed the brief chase.

Just when we thought he would resume stalking the impala the cheetah surprised us again by getting up and trotting down the hill, in the opposite direction to where the impala were.

We decided that it might be better for us to leave the cheetah for now and go in search of other animals.

Tuskers and a big cat

We passed several elephants browsing in the trees and made our way towards the Sand River, where a male lion had been sighted earlier in the morning.

We found him quite easily, doing what lions do best, sleeping.

He was so content and unperturbed that he didn’t even bother to look up when we stopped beside him. One of the luxuries of being the dominant predator.

It was time for a coffee stop so we crossed the river and pulled up on the sandy bank. But before we had even managed to get out of the vehicle the radio squawked and Neil told us the coffee break was being postponed.

One of the staff at Inyati lodge had just seen a leopard running through the camp. We were quite close to Inyati and so this was too good an opportunity to pass up.

On our way to where we hoped to find the leopard we spotted a couple of male Nyala grazing in the trees by the river. Unfortunately they were uncooperative and stayed hidden in the bush.

Near the camp we teamed up with Paddy and his tracker to find the leopard.

After a short search we found her creeping through the undergrowth, moving away from Inyati.

Like most of the leopards at Sabi Sands this one did not seem bothered by our vehicles but she preferred walking through the dense bush to walking out in the open, making it tough for us to follow her.

Neil told us that her name was Xikavi (shikavi) and that she had 2 young cubs.

We caught up with Xikavi as she was sniffing around under a tree. Then Pat spotted a kill hanging in the low branches of the tree. Then we smelled it. It wasn’t a recent kill and apparently it was unlikely that it was her own kill, she had just got lucky and found it.

We knew that she was going to climb the tree to retrieve the kill and so we tried to get ourselves into a position where we could get a clear view. Sure enough Xikavi climbed the tree and stole the carcase. It looked like a small Nyala.

She grabbed the kill and brought it down to the ground before disappearing into bush too thick for us to follow.

What a great sighting though. We were lucky to have witnessed it as the whole episode of climbing the tree and stealing the kill took little more than a minute.

The heavily overcast sky meant that the light was a bit flat and dull but, at around 9am, it was almost certainly better than the harsh contrast of light and shadows that a bright sunny sky would have given us.

We took a quick coffee stop then decided to see if we could find the wild dogs again, on our way back to camp.

Approaching the den site we saw a lone dog standing watching us. This was surely a good sign.

Closer to the den we found the 6 puppies lying together under a small bush. Their bellies looked very full and it was obvious that they had recently fed.